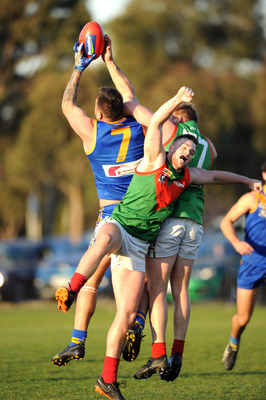 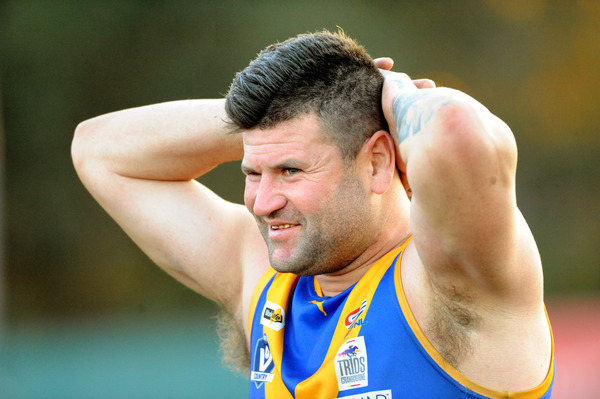 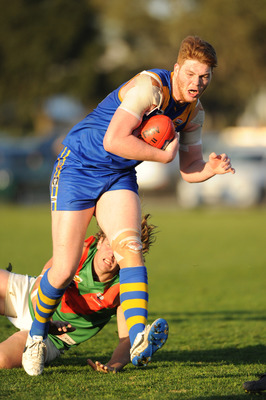 It was virtually deafening every time Cranbourne legend Marc Holt flew at the football.

On Saturday, every ball that came into his space stuck to his hands like glue, it was a power forward unable to be stopped in front of passionate home fans waiting to see whether he could cross the 1000-goal mark.

Despite finishing the day with a couple of blemishes and remaining on 999 goals, his third quarter, featuring four goals was the most dominant of any player this season.

Eventually, the dam wall broke wide open after the Eagles took a nine-point lead at half time, putting on an attacking masterclass against Tooradin in the third quarter that netted 11.4 to just 1.1.

“Yeah, he was back to some vintage form – his third quarter, he was unstoppable. Every time the ball went his way, he marked it,” Eagles coach Steve O’Brien said of Holt’s display.

“It’s great to see – there was a good crowd there, and they were fully entertained in the third.”

Seagulls defender Matt Sloper battled valiantly and probably took the chocolates after restricting Holt to two first half goals, but couldn’t handle his power and timing after half time.

With superb delivery by the likes of Shaun Marusic, Luke Bee-Hugo and Ryan Davey in the middle, Holt pulled down some phenomenal contested marks – often with three or four defenders hanging on to him – and converted them from all angles as the scoreboard updated his goal tally.

Besides shooting for the rare feat, it was a game-changing performance, and zapped any momentum that Lachie Gillespie’s gallant side had heading into the second half.

Early in the final term, Holt juggled a mark tight on the boundary, duly snapping around his body for his seventh and 999th goal.

It was highly skilful, and potentially the start of a historic 30-minutes for the club.

But, agonisingly, Holt missed two gettable shots within minutes of each other in the final term, and didn’t have enough time to create some history.

More importantly, on the scoreboard, the Eagles had slammed on 13 goals to one after half time, with Nathan Gardiner and Kirk Dickson also sharing seven goals between them as they provided the perfect foil for Holt, while Marusic had a dose of leather poising and big ruckman Michael Wenn had a major presence around the ground with some injuries leaving them light on for rotations late.

In a promising first half for the visitors – who were eventually blown away by the emotion of the day – many could hold their heads high after battling to the end. Nick Lang, Sloper, skipper Matt Livermore and Brad Lenders were particularly eye-catching, and weren’t afraid to try and bring the ball back into the corridor.

O’Brien concedes that it was a “scrappy” first half, but was able to swing the momentum despite some injuries to key players and run the Seagulls – who were brave for a half – off their feet.

“We started playing our brand in the third quarter – we didn’t focus on the scoreboard at all, it was about the brand of footy we were playing, we just had to correct a few things, and we managed to do that, and the rest looked after itself,” he said.

“It’s been a strong point running out games, and we challenged a few of our guys to push through, so it gives us a lot of confidence that we are always going to be thereabouts.”

O’Brien said that late in the game his side tried to get Holt to the milestone, but insisted it wouldn’t stress the legend too much.

“In the last, he had a couple of chances (to kick his 1000th), but he missed them, but the game was in the keeping so it was definitely a focus to try and get him over the line,” he said.

“The thing about Marc is, he’s an unselfish player – for him, it was never about the milestone, but it would have been nice considering the day at the club, but for him, it was just about the team and performing the way he needed to.”

In another heart-warming moment in another strong win that has the Eagles now back to second with Berwick yet to play this round, youngster Nick Darbyshire played his first senior game since a major health scare on the field earlier this season, kicking a goal after taking a brilliant mark in the third term.

“When we read his name out on Thursday, there was a pretty big roar in the room, because it was a scary moment – he’s been all ticked off, and he’s a valuable player for us,” O’Brien said.

“It’s good to have him back and up and about.”

The only negative to come out of the day is the impending tribunal hearing set to take place, with the league confirming that Marc Holt is being investigated for an incident against Berwick back on 30 June, potentially putting a cloud over when he will reach the historic milestone.

Both sides will enjoy the week off before taking the field again on 28 July, with Cranbourne to host Officer and Tooradin-Dalmore to welcome Doveton in what are both important games.