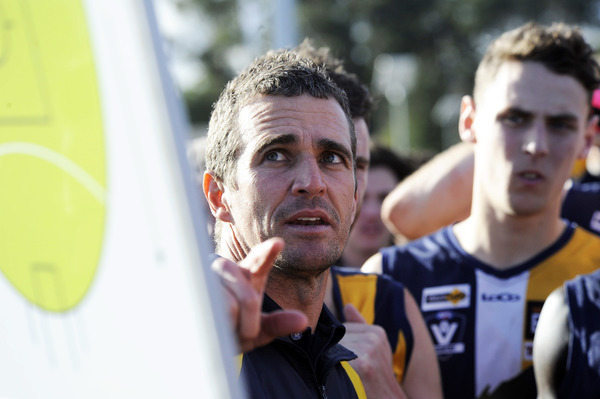 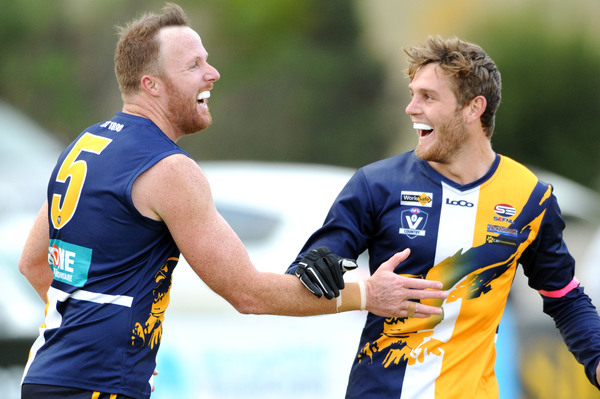 Beaconsfield coach Leigh McQuillen is quietly bullish about what sort of impact his young side can have in what looms as a vital block for his side.

He describes his club as being the talked about “poor cousin” in fourth to power clubs Narre Warren, Berwick and Cranbourne, but hopes they can shed that tag in the lead up to finals.

The Eagles are almost out of touch of a top-three finish after slipping to a 6-5 record after falling to Pakenham in torrential conditions last round.

McQuillen acknowledged that after a bunch of key losses, a month of wet weather football hasn’t suited their style, but said the tide will turn.

“Against Cranbourne only a few weeks ago at their home ground, we believe we should have won that one, and then obviously we’ve dropped away a bit,” he said.

“We’re probably a win where we’d like to be, and we wanted to be in a position to push top three, whereas now we need to beat the top three to make the top three – it’s going to be a real challenge for us.

“You lose guys like (Scott) Meyer, (Nathan) Langley, and some of the bigger bodies, it probably doesn’t help you – we lost (Michael) Misso early on in the year and he would of relished these kinds of conditions, so we’re bringing in smaller bodies and inexperienced kids.

“We’ve had to re-adjust, and we’ve thought of playing our seasoned reserves guys, or bring in some kids – you look at Narre, Berwick and Cranbourne with the big bodies, and we’re not as thicker set as those three, but on a dry day, we can take it to them all.”

McQuillen said that his young side is searching for wins, but have to scale back their expectations while they wait for key personnel to return so they can have a genuine assault on the premiership.

“We’d hope that we get some dry weather in September, because it does suit us – in saying that, our win against Cranbourne earlier in the year was in the wet, but I hope we can manage our list enough to get enough of these players back, and then hit our straps,” he said.

“Losses come around, and we’ve got a big couple of weeks against Berwick and Cranbourne, and we want to have a positive showing against both of those sides.

“Sometimes, you have to strip it back – we had a conversation last Tuesday night where every player spoke about where we were as a team.

“To be brutally honest, and I said this to the boys, that against Pakenham, we had four players who got a pass mark.

“So if you have 18 players who don’t even get a pass mark, you’re not going to win.”

The inclusion of champion big man Scott Meyer (fractured leg) before the end of the season as well as spearhead Nathan Langley will give the Eagles a much needed boost, with McQuillen indicating the pair’s not too far away.

“We’ll be aiming for Scotty for the second last game against Tooradin, and worst case, against Cranbourne in the last game – he keeps pretty fit, so we know what we’ll get from him,” he said.

“The good thing is, guys like Lachlan Morrish, Riley Welsh, James Cairns – who played his first senior game on the weekend – they are all getting exposure in the ruck.

“Scott’s not going to be around forever, so we know we need to put time into these young kids.

“We also expect Nathan to be available for Berwick.”

As a result of key injuries, McQuillen has been forced to turn to youth, and believes the young talent in the club is as good as any in the competition.

“Last year, (Lachie) Modica was runner up in the best and fairest, and Misso was our best finals player, so trying to replace two local boys straight away is difficult, and we’ve had to expose a lot of kids,” he said.

“At the footy club, we structure it really differently (at training) – all pre-season, we had the Under 19s train with us, and we invited our 17s up as well.

“There’s some exciting talent coming through – I’m looking at results, but I’m also looking at the club in the future.

“Playing a kid like James Cairns was pretty exciting – you can just see he’ll play a lot of senior football, and we want him at the club whether I’m around or not.

“You want to blood kids, but you always want wins along the way.”

McQuillen – who also coached the SEFNL under 19s at Interleague this season and is an assistant coach for the Victorian under 12 Boys team – is a big advocate of junior talent, and eyes ambitions in the AFL.

“I’ve certainly starting opening those doors (in the AFL) – I believe I’ve definitely got something to offer,” he said.

“But I’m also mindful of leaving Beaconsfield in a strong position when I do leave.”