Schools across the Cardinia Shire have welcomed some “much needed certainty”, following the State Government’s announcement that VCE exams will […]

Schools across the Cardinia Shire have welcomed some “much needed certainty”, following the State Government’s announcement that VCE exams will begin in November.

Year 12 students have been dealt a cruel blow, thanks to the Covid-19 pandemic, which has wiped them of many final year customary celebrations, however an announcement from Education Minister James Merlino on Friday 22 May, provided some much-needed clarity.

VCE exams will begin in the week of 9 November, which is a month earlier than what was originally expected when home learning was first announced.

Exams will be completed by 2 December, which will allow ATAR scores to be calculated and VCE, VCAL students to get their results before the end of the year.

Year 11 and 12 students will return the classrooms from Tuesday 26 May, with staggered starts in place for other year levels.

The general achievement test (GAT) is set to go ahead on Wednesday 9 September.

Minister Merlino said the early return to on-site learning made it possible to bring-forward the exam commencement date.

“The announcement gives students, teachers and parents certainty in what has been a very disrupted year,” Mr Merlino said.

“The revised dates mean students will get their results and an ATAR in 2020, giving them a clear pathway to further study or employment next year – and a break to celebrate the end of school.”

Independent schools across Cardinia Shire and City of Casey have welcomed the decision.

The high achieving students at Nossal High School in Berwick are preparing for their return, despite many relishing the opportunity to learn from home.

“It’s a significant relief because we’ve been waiting quite a while to get dates on VCE exams.

“Naturally our Year 12 students have been quite concerned as to what’s going to happen, and of course our kids are more anxious than most because they’re all targeting high scores.”

Mr Page said the announcement had allowed staff and students to continue planning towards the end of the year.

He said staff will resume on site from Monday 25 May for a pupil-free day, before Year 10s studying VCE subjects will join Year 11s and 12s on Tuesday 26 May.

Year 10s start back on 1 June while the Year 9s won’t return until 9 June.

At Beaconhills College, the students are all set to return to some normalcy, with Headmaster Tony Sheumack stating the announcement was the “final piece in the puzzle”.

“We warmly welcome the announcement of the VCE exam timetable and we are delighted that the Class of 2020 will finish in the calendar year,” Mr Sheumack said.

“We can now complete the planning for our VCE program in semester 2 and recalibrate work for the Class of 2020 to match the new timetable.”

“When we went to online learning it wasn’t clear how this year would play out and now we can see a bright future for the Class of 2020,” he added.

“Our staff are now able to plan out the coursework and assessments to match these new dates. This is the final piece in the puzzle for our Year 12 students and provides the clarity we needed.”

Meanwhile, St Francis Xavier College students will continued to be supported by the school.

“The release of dates will provide some assurance for students moving forward,” Beaconsfield head of campus Rebecca Cetrola said.

“The college will continue to support our students to achieve their best and thrive in their studies.” 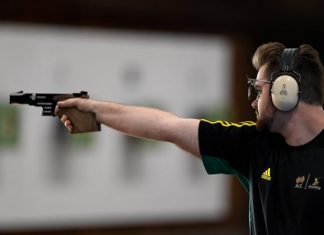 18/01/2021
Just what 2021 has in store for Berwick shooting star Sergei Evglevski is anyone's guess. The 2018 Commonwealth Games silver medallist is preparing as if...