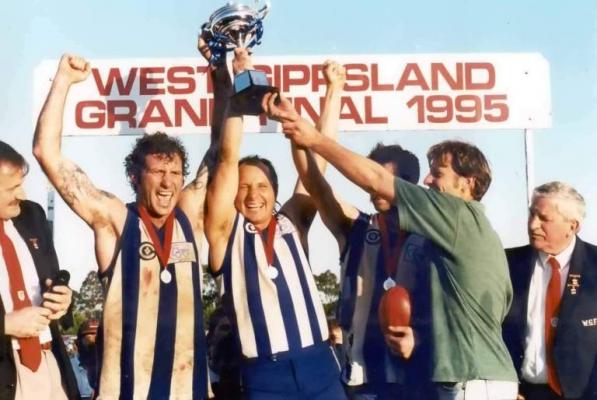 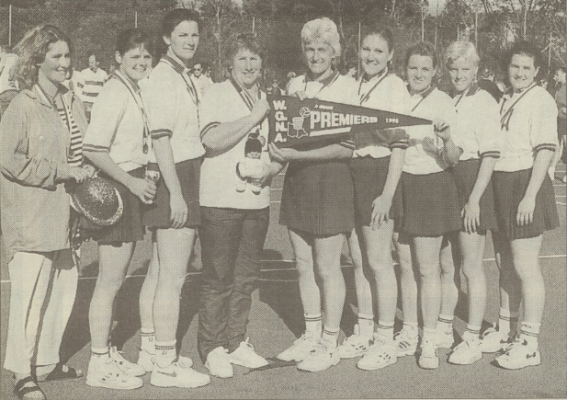 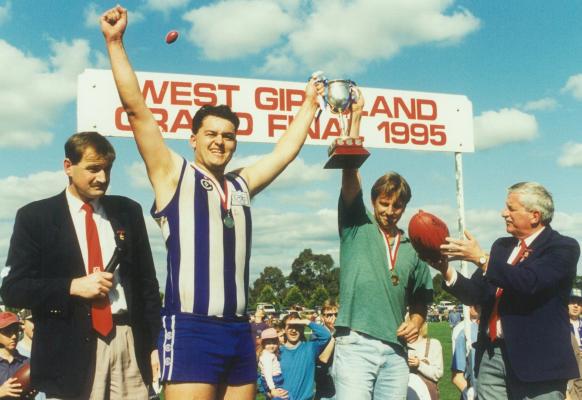 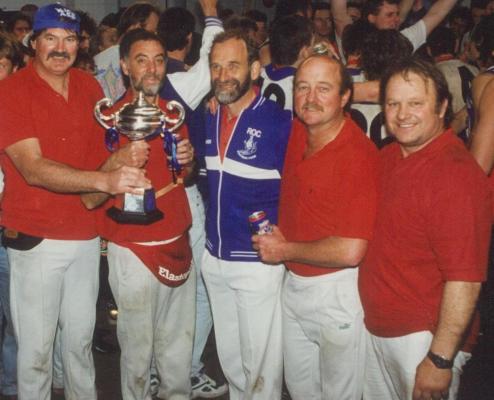 Saturday 16 September, 1995 was a golden day to cap off a golden year for the Rythdale-Officer-Cardinia (ROC) football and […]

Saturday 16 September, 1995 was a golden day to cap off a golden year for the Rythdale-Officer-Cardinia (ROC) football and netball club.

It is a day well and truly entrenched in the minds of all those past and present involved with the mighty Kangaroos at Starling Road.

This year was supposed to be the 25-year-anniversary of the club’s senior premiership win against Beaconsfield in the West Gippsland grand final at Cora Lynn, as well as the celebration of back-to-back premierships in the reserves by just a point, and the A Grade netball side coming from behind to run over the top of Tooradin to claim back-to-back titles in an incredible game of sheer determination and belief.

But like most things this year, it’s been put on hold.

The club is, however, determined to hold a celebration next year, which also coincides with the club’s 1996 senior premiership glory in what was truly an era to savour for the Kangaroos.

After joining the club after the departure of coach Peter Bastinac at the end of the 1994 season, a familiar face on the local scene took the helm at the Kangaroos – ex-Noble Park and Springvale star Mick Fogarty in his first coaching role.

It was a success story from the moment the respected coach stepped foot inside the four walls of the club.

One year, one premiership.

It’s the stuff of dreams.

Upon reflecting of that day, and that year, Fogarty told the Gazette that he was privileged to be involved with the club and its players – he said it was the perfect club to begin his coaching journey, one in which has taken him to great heights.

“I was lucky enough to be involved with such a wonderful group of players, and when you have the success you have that bond that everybody talks about with a premiership,” he said.

“And being in the trenches with them as well as a player, it meant so much more to me.

“ROC obviously lost to Garfield two years previous to that in the ’93 and ’94 grand final, so the nucleus of the side was there, so to walk in not knowing anyone and not only have the success, but to be welcomed into a club was amazing.

“I’m forever grateful to the football club in regards to the ultimate success.”

Taking the Kangaroos to second place on the home-and-away ladder, the club was building strongly to set up a mouth-watering clash against Beaconsfield in the grand final – a club that had lost just one game through the regular season but were stunned by Fogarty’s group only weeks earlier in the second semi-final by 43 points.

Fogarty said that the belief garnered prior to the grand final, and in fact during the home-and-away season was an integral part of their eventual success.

“We were beaten convincingly the first time we played Beaconsfield, and under Koopy (Doug Koop), they were raging favourites really,” he said.

“I had an inkling though – we played them in Round 18, and they did beat us, but I had a feeling we could beat them.

“It pretty much panned in the end, but they flogged us early in the season in front of a big crowd and we were really embarrassed by that, but from then on, we had a feeling we were good enough.

“Once we got over them in the semi, we were confident – taking nothing away from Beaconsfield, I just thought we were quicker around the footy, and we felt if we could get on top we’d get the result.”

On grand final day, Fogarty’s men banished the demons from previous years to claim their first premiership in the West Gippsland Football League, and its first as a merged club.

It’s arguably one of the most important days in the club’s long history.

On what was a warm day at Cora Lynn, the first quarter was an arm wrestle, with the Kangaroos nudging ahead by a couple of goals at the major break.

But the third quarter is the premiership quarter for a reason.

And the Kangaroos hopped ahead.

Well and truly putting the disappointment behind them, and in the middle of a stunning run of success for years that saw the club reach five consecutive West Gippsland grand finals between 1993 and 1997, the Kangaroos clinched a dominant flag, winning by 51 points after a 10 goal to two third term set the game up.

In a performance well and truly entrenched in memory for the club, Les Hawkins and Robbie Cousins led from the front with dominant displays, while others such as Mick Moylan, Robbie Young, Kable Dowsett, Tim Johnson and Wayne Woods (four goals) played brilliant games to help seal the deal.

It was a day to remember for rookie coach Fogarty, and the local football club with its dedicated members, players and volunteers who shared in the pain of previous years and were desperate to see the trophy cabinet at Starling Road filled to the brim.

“The whole club, with the netball, the day itself was a wonderful opportunity in itself to salute and they did, and not just in football, but in netball,” he said.

“As a coach, you rarely stay at the one club for a hell of a long time, you just move on, and there were people at that football club, the volunteers, Kevin Gilbert, Frank Wyatt, Rob Robinson, those kinds of people, to see the joy on their faces, that’s what it’s about.

“That was my satisfaction – the people from the football club that welcomed my family and me in, and made me feel like a real part of the club.

“It was so rewarding – it was a wonderful, wonderful day and I’ve got so many great memories.”

Ironically, on that day, Doug Koop (current Officer coach), was the man at the helm for Beaconsfield, while his opposing coach Fogarty (current Beaconsfield coach) was looking to bring the Eagles down.

Fogarty said it was incredible to see the paths taken by both coaches, who have both enjoyed strong playing and coaching careers that have seen them reach great heights and leave an enduring legacy in Victorian football.

“It’s weird, isn’t it?” he said of their current coaching positions.

“Koopy and I played at Springvale too so we had a relationship there, and we both at the time thought it was time to dip our toes into coaching.

“But yeah, it’s quite interesting, I’ve ended up now at Beacy and he’s ended up at Officer.

“Back then as a player-coach, what I loved is that you could control things on the ground, and if you wanted to change things up straight away you could.

“He’s got a good footy brain, he knows his stuff – he would probably admit the same thing, as a playing-coach you become a bit of a control freak, and you want to control everything.

“We were both playing-coaches, and we had to make sure the balance was right – and 25 years later, here we are.”

With 2021 set to see the club celebrate its 1995 glory, as well as Fogarty’s back-to-back premierships in 1996, he said he can’t wait to get back to the club and reminiscence on a period in his football life he’ll never forget.

“We had a terrific celebration (1995), I struggled to keep up with them, but it was a wonderful three or four days,” he said.

“Back in those days, the opposition would have a beer with you on the Monday, and that was what was great about back then, you played tough on the field, but every time after the game we’d have a beer together.

“It’ll be great to see all the boys again, and you look at them as a ROC player, and what they gave you.

Gareth Sheean, who captained the reserves that year and starred on grand final day with five goals against Beaconsfield, said while his recollections of the reserves back-to-back flag that year are slightly hazy, it was a memorable day for all involved.

In that day, which Gareth said was a warm afternoon, the scores were level at quarter time, and then the Eagles kicked away in the second, before the Kangaroos fought its way back to come-from-behind to snatch a one-point victory.

“It was a good day, the ’95 team in the twos, ROC and Beaconsfield were the two best sides all year, and Beacy finished on top and got us a couple of times that year from memory,” he said.

“It was a huge day for the club – the seniors lost ’93 and ’94, and it was their third chance for them, but the twos were a good side for a long period of time.”

Sheehan said that the celebrations at the club over that weekend were epic, and one he’ll never forget.

“It was pretty big there on the Saturday night,” he explained.

“The place was just packed, and I don’t know from memory how many people were there, but it was a big night, and a big Sunday.

“There was a lot of people who had come back to the club that year – it was more just to get the monkey off the back for the seniors, which was what it was all about.”

While the footballers brought home its fair share of silverware, with the seniors getting the monkey off its back for good, on the courts the A Grade netballers shone, coming from behind to snatch a remarkable premiership against Tooradin.

Seemingly down and out with just four minutes left to play in the last term, the Kangaroos sprang into action to overturn its seven goal deficit and win one of the more remarkable matches, and in the process claim back-to-back titles to cement itself as the dominant force of the league.

A Grade captain that season, and club legend Tina Tivendale, who played in six A Grade premierships during a famous career, said that the group had so much inner belief that they could fight its way back and come out on top.

“It was an absolute privilege, we were fortunate enough to have very good players come through our juniors,” she said.

“Without sounding smug or anything, Tooradin had thought they won, and tried to ice it, and we were able to overcome it – it was really incredible.”

Tivendale said that while the 1989 premiership was probably the highlight of her career, the ’95 glory was special for many reasons, including the fightback from a position that was moments away from a loss, from a personal perspective, and the fact that is was exactly 10 years since the club won the 1985 A and B Grade titles.

“It stands out because we were down and out – the group of girls had this ‘never say never’ attitude,” she said.

“Once we got one or two (goals), we got on a roll, and it sort of went from there.

“We were down and basically out, and we just kept on fighting. That stands out, and it was my last A Grade premiership personally.

“And the seventh A Grade premiership won my daughters played in, so I’ve sort of got a connection with that one as well.”

While the B Grade girls went down in the grand final that day, the C Grade were able to triumph to bring home even more silverware to the club in a celebration to remember at the club rooms.

It’s a celebration the whole football and netball community will be looking to re-live, and when they do, one thing is going to be certain, Starling Road is going to be ROCking.