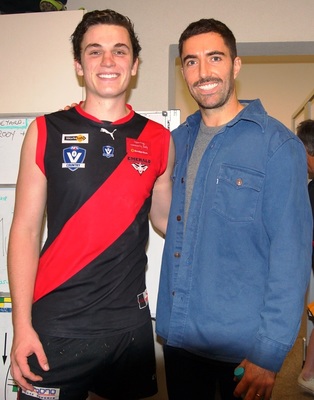 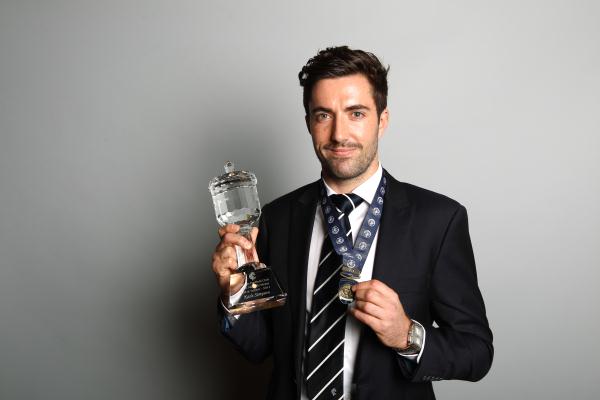 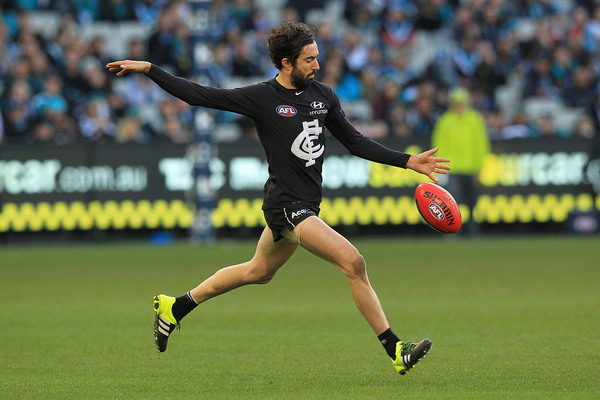 Proud Emerald product Kade Simpson retired from AFL footy on the weekend after a brilliant 342-game career. Lance Jenkinson and […]

Proud Emerald product Kade Simpson retired from AFL footy on the weekend after a brilliant 342-game career. Lance Jenkinson and sports editor Russell Bennett reflect on the journey of ‘Simmo’ in the game’s top flight…

“It’s really nice to hear that I’ve had that effect on guys and guys really look up to me. You don’t really speak about it too often, but I was pretty overwhelmed to hear guys say that.” – Kade Simpson.

Over 342 games – spanning across three decades – at AFL level with Carlton, Simpson stuck true to the navy blue, even under some of the most trying of circumstances.

The inspirational 36-year-old finished his career with a 36 per cent winning percentage, so it was certainly not all roses from a team perspective.

But while some players ultimately look elsewhere to chase premiership glory in the twilight seasons of their careers, Simpson opted to leave a lasting legacy at Carlton, paving the way for a new generation of stars, such as Patrick Cripps, Sam Docherty and Sam Walsh, who spoke glowingly about his impact on the group last week.

“I was exactly the same as what they were,” Simpson said.

“I sort of just looked and took it all in on what the older guys did and tried to model myself on how they prepared and how they went about their footy, and how they trained.

“It’s really nice to hear that I’ve had that effect on guys and guys really look up to me.

“You don’t really speak about it too often, but I was pretty overwhelmed to hear guys say that.”

And ‘Simmo’ is one of only two players from the AFL Yarra Ranges competition to play 300 games at the top level, with the other being Yarra Junction and Richmond legend Jack Dyer.

Simpson’s longevity is somewhat surprising, considering he played just three games in his rookie season, and three games in a second season cut short by injury.

But in Round 15, 2005, he became a permanent fixture in the Carlton side, avoiding injury and form dips to play an incredible 158 consecutive games, lasting until Round 12, 2012.

And, he did it with a reckless abandon.

Pound for pound, Simpson was one of the most courageous players in the AFL.

On a weekly basis, he would throw his slight frame under the high ball in front of a hulking forward to win back possession for his Blues.

It would send a shiver down the spine of supporters, who must have wondered after some collisions how Simpson would get back to his feet.

The half-back flanker did it for his team and for the jumper that he loved.

“For the first few years I struggled to get out on to the park, so to eventually play 300-plus is pretty special and now I can sit back and enjoy that,” Simpson said.

“Every time you pull on the navy blue jumper it’s pretty special.”

Simpson was an unassuming leader, not one to seek out the spotlight.

Carlton’s media manager even joked that he played for 18 years and “did three interviews in that time”.

Simpson was one to let his actions speak louder than words, winning a John Nicholls Medal as Carlton’s club best-and-fairest in 2013, representing Australia eight times in International Rules (including taking out the Jim Stynes Medal for the best Australian player in 2008), and vice-captaining the Blues for three seasons.

“I’m probably the only bloke happy to be retiring during Covid with less people around, less media and less attention,” Simpson said.

“It’s probably fitting that I can go out that way.”

Simpson cherished the friendships he made along the way.

He said it was a highlight to be vice-captain under one of his best mates, Marc Murphy.

On the eve of his 300th game back in mid-2018, Simpson spoke at a special function at ‘The Hangar’ – the Emerald footy club’s home base at Chandler Reserve in Avonsleigh. He spoke from the heart about just how tough his start to AFL life really was.

“In that first year I didn’t get a lot of time on the ground,” he said.

“They didn’t rotate like they do these days, so in my second game I played two minutes and spent the rest of the game on the bench.

“In my second year I played three more games but finished the year with a broken hand and missed the last couple of months of the season.

“But once I got that self-belief that I belonged in the senior side, that went a long way to my form picking up and Denis (Pagan) giving me the confidence to just go out there and play my style of football.

“He always wanted me to take the game on, and he’d tell me if I got caught holding the ball he didn’t care – he wanted me to keep doing it.”

Simpson admitted Pagan was hard on his players, but said he learned a lot about hard work while playing under him.

After nailing down a regular spot in the Blues’ senior side, that’s when Simpson went on to play those 158 consecutive games at the level.

He said his ability to play through injuries, and perform at a high level, was also something he learned under Pagan.

And it all began when Simpson was identified by long-time Carlton recruiter, and west Gippsland product, Shane O’Sullivan while playing for Emerald and the Eastern Ranges.

He ultimately proved to be an O’Sullivan gem, landing at the Blues with pick 45 in the 2002 national draft.

Having got through his farewell speech to teammates and club staff without shedding a tear, Simpson almost became emotional when O’Sullivan reflected on his discovery of Simpson.

“I actually got through the speech and everything pretty well and then he started to talk and I started to choke up and I thought I was going to start bawling my eyes out,” Simpson said.

“He’s like a father figure to so many of these guys that he drafted, so it was pretty special he was able to make it.”

Current Blues co-captain Sam Docherty, also a favourite son of Gippsland footy, told the Carlton website he feared he’d never get the chance to run out alongside “his favourite team mate” ever again after being cruelly struck down by injury for two seasons.

But the seemingly everlasting Simpson ensured they would – the pair running out in the famous navy blue strip 16 times this season, before – sadly – a minor calf strain to Docherty meant he’d miss Simpson’s swansong.

And what a swansong it turned out to be.

While the Blues went down gallantly to one of this year’s flag fancies, the Lions, by 17 points, ‘Simmo’ – donning his customary long sleeves in the wet – finished with 19 touches after an early head clash with Dan McStay left him clutching his mouth (and showing that trademark toughness of his).

And to cap off his final game, he slotted his first goal of the season – and the 139th of his career – as he received a handball from Matthew Kennedy to drill a major from 50.

Simpson’s advice for young footballers is simple: “Enjoy the ride, take it as it comes, have fun with the people that you meet and it goes quick!”