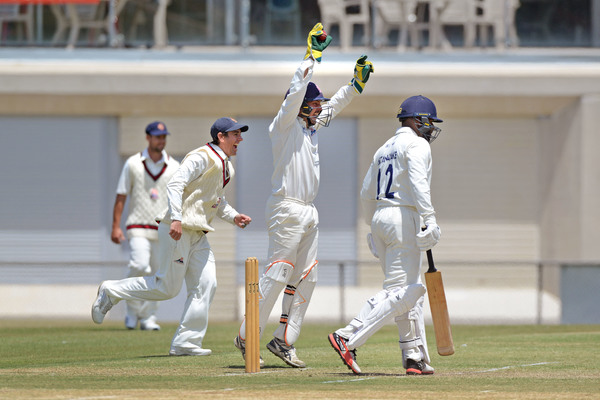 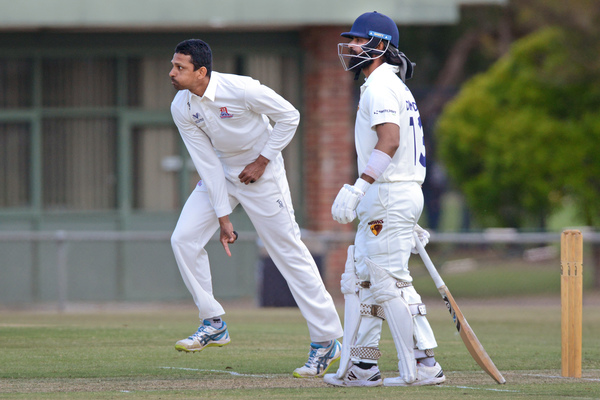 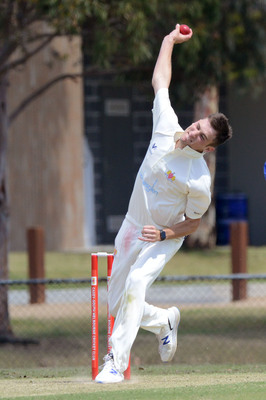 A positive day at Shepley Oval has Dandenong in a strong position at the end of day one against Kingston-Hawthorn.

The day couldn’t have started much better for the Panthers with James Nanopoulos castling Hawks opener Matt Accocks second ball of the day.

Nanopoulos was in the action again as he got the Panthers second scalp of the day after an edge went low through to Edgeworth in the cordon.

At the other end debutant Locky Scott was pounding through the crease and bowling extremely tight lines, unlucky not to get an early scalp, and Scott went for two runs in his first over and proceeded to bowl four successive maidens afterwards.

Peter Cassidy came into the attack and bowled his trademark areas that allowed Jacques Augustin to take a superb diving catch to his right.

On the stroke of lunch, Suraj Randiv and Cassidy were bowling extremely tight, and with Sam Newell being bogged down at Randiv’s end he started to use his feet, a moment for Augustin to get back in the game again with some neat glove work when one flew past the edge.

Randiv and Augustin combined once again before the umpires called lunch, putting the Hawks in all sorts at 5/43 at the break.

After lunch, the Hawks mounted a fightback, through youngster Nivin Sathyajith and Ramneet Dhindsa who put on 85 – albeit with some chances.

Sathyajith brought up his milestone on debut with a neat cut shot backwards of point before Randiv trapped him in front to open the door for the Panthers.

Scott and Gehan Seneviratne opened the floodgates and wrapped up the innings, leaving 167 on the board for Dandenong to claim its second win of the season.

With 21 overs to bat, 167 was a difficult figure to chase in such a short period of time without risk, but when Brett Forsyth and Tom Donnell got off to a flying the start, the total looked in early trouble.

Forsyth was sending the ball to the fence for fun in the first four overs, sitting on 27 from 21 balls as the brand new Kookaburra found an early home in the middle of his bat.

Donnell soon after joined the party, also racing to a run a ball to get the total to 0/48 after eight overs.

Shifting to 0/64 the Panthers were right on top, before Sathyajith claimed quick wickets to add to his already memorable debut.

Forsyth, Donnell and Lincoln Edwards all fell in a short period of time to halt the momentous Panthers batting line-up in making large in roads at the close of play on day one.

Skipper Tom Donnell was pleased with the start having the Hawks five down at lunch, but at the same time was slightly disheartened the middle session cost his side taking home the points at stumps on day one.

“It was a really good start, I couldn’t have asked for much more,” he said.

“We just needed to keep things rolling and the wicket flattened out a bit, it got a bit easier to bat, we probably let a couple chances slip which wasn’t ideal but we just wanted to keep putting them under pressure.

“I mean no one ever means to drop a catch or anything like that but instead of them making 160 we might have kept them to around 100 or 120 which might have given us the opportunity to get them Saturday night.

“Those things happen, full credit to their batsman, they stuck at it and made the most of opportunities – we will just have to work harder this week.”

Going at a run a ball in the early stages, it seemed the Panthers fancied their chances of chasing the target down in the 21 overs at the end of the night, but Donnell said it is just a mindset he and Forsyth have each innings to be positive with intent to score.

“We just went out there to bat as normal, as we do, however it comes, it comes,” he said.

“We did want to be positive, that was always on the cards to look to score, we got off to a really good start.

“We would’ve liked to be a few more run overnight but I think we are in a really good position to get first innings point and see where that can take us.”

Locky Scott was a heart-warming story of the day, as his family watched on in the pavilion he steamed in with the new ball – Donnell believes he will be a consistent first XI bowler and although his figures of 2/27 from 14 were notable, was unlucky not to claim more.

“He was good, I haven’t been able to play with him a lot but he was impressive,” he said.

“Hit some good areas, and was probably unlucky not to get an early wicket.

“He came back in his second and third spells and bowled really well, he finished the tail off which was pleasing.

“Hopefully he takes a lot of confidence out of that, seeing it as a stepping stone and only get better from there.

“He was good, it was great to have a fresh player in the side who was full of energy and good in the field – it was good to see.”

Dandenong are 3/78 overnight with Comrey Edgeworth (12) and Ed Newman (1) both unbeaten overnight with a further 89 runs to chase for first innings victory before what looms as an entertaining remainder of the day.

Casey-South Melbourne, meanwhile, had an up and down day at Casey Fields against Camberwell Magpies, and will need to bat well to clinch the points on day two.

After the Magpies won the toss and elected to bat, the Swans’ seamers got off the brightest start possible, with right-arm medium pacer Jordan Hammond (2/38) skittling the stumps of dangerous opener Isaac Conway in the opening stages, before another strike by Hammond and a Jackson Fry (2/46) wicket after a sustained period of pressure saw the visitors slump to 3/29.

Fry once again broke through for his second scalp not long after, with Oliver Gunning feathering one behind to keeper Devin Pollock, leaving the visitors 4/40 and in desperate need of a partnership.

But that’s where the Swans’ dominance ended, with the Magpies’ most experienced pair, Tom Russ and Simon Hill got the visitors back on track.

The pair changed the momentum of the contest with a decisive 120-run stand, before Shubham Bhargave notched up a fluent 53 to put on a further 102 runs with Russ – who was beginning to really motor on his way to a century.

Despite the lean start, the Magpies champ ticked over for his fourth Premier Cricket ton as the Magpies surged towards 300. After really picking up his aggression and motoring to 135 with number 11 Chris Bridie on the other end, Nathan Lambden (3/75) managed to finally end his dominance, with the visitors reaching 315 off just over 94 overs.

Lambden managed to snare the final three wickets of the innings and charged in all day, Hammond showed great control to go at under two an over, while Jackson Fry found a bit of touch after a lean start to the year.

But the challenge now awaits Luke Wells and his batting group, who will need to bat well without the in-form Nathan Freitag in its ranks for this match. A win could see the Swans sitting just outside the top-eight at the end of the round.

Pearcedale’s extremely disappointing season continued on the weekend, with the Panthers staring down the barrel of an outright defeat to Pines.

The Panthers batted first, and could just reach 85 in 52 overs after the top order were blown away. Recruit Patrick Beckham top-scored with 22, but there was very little resistance around him.

The visitors wasted little time, passing the Panthers in just 21 overs and with the loss of no wickets, before declaring with seven overs left to play.

Almost immediately, the Panthers lost a wicket to be in a dire situation at 1/6 at stumps as the likelihood of a double-relegation becomes almost a certainty.

Endeavour Hills were no match for Taylors Lakes at Lionheart Reserve on Saturday, with the Eagles going down by 50 runs.

The Eagles fielded first, where the home side racked up 3/201 off its 45 overs off the back of Lachlan Marr’s destructive and unbeaten 60.

While the Eagles showed some fight to reach 151 in reply, the home side had too much class and firepower.