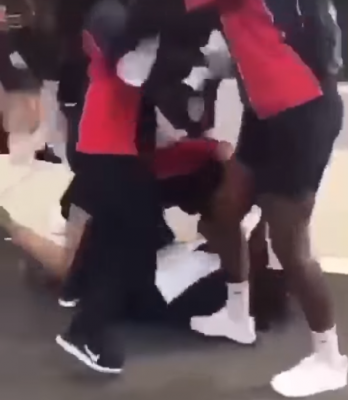 Footage of a savage school yard brawl has circulated on social media, which purportedly shows a 13-year-old girl set upon […]

Footage of a savage school yard brawl has circulated on social media, which purportedly shows a 13-year-old girl set upon by a group of girls.

The victim, a St Francis Xavier College student from the Berwick campus, was attending the school’s Beaconsfield campus during the Covid-19 lockdown, when the brawl is alleged to have taken place on 19 May.

Her father, Sam, said he had to work during the home learning period and was forced to send his daughter to school.

He claimed his daughter didn’t know her alleged attackers and said he still doesn’t know why she was targeted.

“There’s a lot of issues with these girls and why they’re doing this,” he said.

“It looked like they were having fun taking videos and taking turns to kick her on the ground.”

Sam, who didn’t want his surname published, said the attack lasted 30 seconds and was like a “boxing match with Mike Tyson”.

“These things shouldn’t happen at all,” he said.

He said his daughter was “too scared” to return to school, and claimed she keeps receiving “threatening calls” from the alleged offender.

“On 19 May, there was a confrontation between a number of students at our school that was verbal and physical in nature,” a statement read.

“Our highest priority is the health, safety and wellbeing of our students. On the day of the incident, staff responded quickly to restore calm.

“The College has taken its own disciplinary action consistent with Diocese of Sale Catholic Education Ltd policy, to express our expectations around what is acceptable student conduct.

“The matter has been referred to Victoria Police and the College is assisting them with their investigation.”

A Victoria Police spokeswoman told the Gazette that a 12-year-old girl was spoken to by police following the alleged assault and was released pending further enquiries.