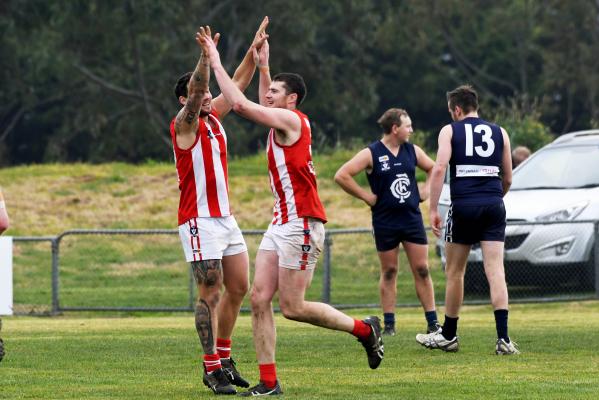 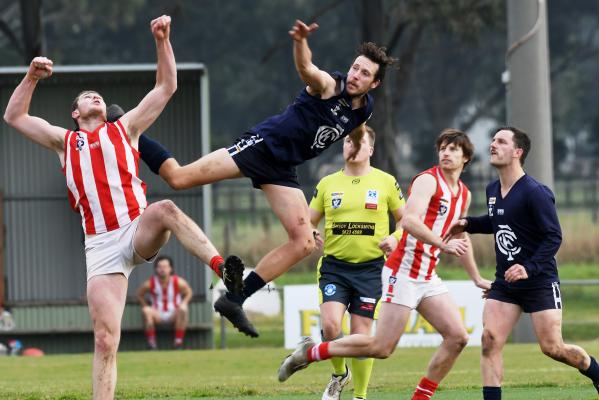 If the league contenders needed a reminder if who was the best side in it, Ellinbank certainly sent that statement on Saturday.

Yes, Nilma Darnum aren’t at its best, but the Bankers made light work of their opposition, reassuring all other frontrunners that they are indeed the heaviest of heavy-weights.

The Bankers launched out of the blocks, with six goals in the opening stanza.

Then further improved its efficiency in front of goal, with seven in the second.

With five straight on the board, the Bombers neat kicking for goal assisted the side in keeping the scoreboard prettier than it was.

The second half revealed the true tale however, as the home side rattled home 18 goals to one.

Chris Dunne and Nathanial Paredes kicked half a dozen each and loomed as potential goal kickers each time the ball went inside 50.

The Bankers did quite the contrary to putting the cue in the rack, and coach Ben Wragg revealed it was something he wanted to see.

“I put a bit of pressure on them (his players) at half-time, we knew the way the game was unfolding and the footy we were playing,” he said.

“I put a bit of pressure on them (because) a lot of other sides have put sides away a bit more than us this year.

“I stressed the significance that the side needed to put the foot down and come away with a big one, I suppose it kept the boys in the game and not take the foot off the pedal,” Wragg said.

With such an array of goal kickers, Wragg is pleased his side can hit the scoreboard in many ways, while also saying the zero that sits in the losses column isn’t having an impact on his side.

“We don’t rely on one or two blokes to have a good day, usually if one or two don’t perform, another one or two will.

“I don’t think it does (not losing), we have a bit of a winning attitude and have had enough heartbreak over 2019 – being one of the top sides and losing the grand final – and then in 2020 coming in and being confident with a good list and being hurt again by Covid.

“We have a lot to catch up on, I can’t see them wanting to drop one anytime soon,” Wragg said.

In the tightest match of the round, Longwarry banked a much-needed win over Neerim Neerim South.

The Crows begun the round outside the top five, but snuck into the finals race with a sterling win over the Cats.

It was a nail-biter of an opening half; four points separated the teams at the first change and two at the main break.

With a lead of a kick and change at the final break, the Crows kicked three goals to one in the final term, extending the lead to a neat four goals – and more importantly – collecting the win.

The ever-so-reliable Jason Wells kicked four again, continuing his fine form as of late, while Jedd Serong was among the best players on the ground.

Russell Lehmann isn’t known for his goal kicking, but he also hit the scoreboard in the tight affair.

A Damian Mann bag assisted the Bloods to a big win over Catani.

Mann kicked seven for Trafalgar, but it didn’t win the votes of the coaches, who only gave him fourth best on.

The Blues kicked just two goals for the match and could only manage five minor scores in the second half.

Buln Buln did what it had to do over Nyora, but it certainly wasn’t a clash to write home about.

The Lyrebirds kicked seven goals to just two behinds in the opening term, setting up the win.

Wayward kicking prevented the home side from really rattling home a big win, but this side continues to just chalk up wins.

Trent Baker was comfortably the best player on the ground with his three majors.