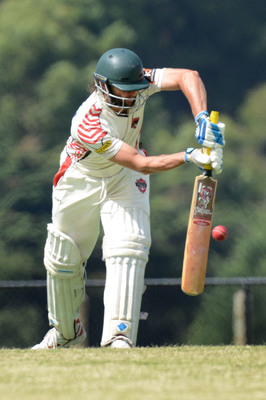 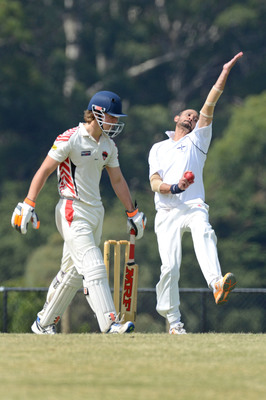 WGCA DISTRICT AND SUB-DISTRICT DIVISION REVIEW – ROUND 13 (DAY ONE) As we edge closer to finals, the stakes continue to rise and Emerald – who is just six points behind fourth-placed Officer – put its best foot forward against ladder-leaders Cranbourne Meadows on day one of their clash. The Bombers elected to bat first […]

As we edge closer to finals, the stakes continue to rise and Emerald – who is just six points behind fourth-placed Officer – put its best foot forward against ladder-leaders Cranbourne Meadows on day one of their clash.

The Bombers elected to bat first and skipper Mitch Daley (64) led the way as he opened the batting and made crucial early runs. When Daley was run out, Emerald sat at 3/95 – a strong position, but the Bombers needed another big partnership to really take control.

They got all that and more.

Sublime knocks from Mark Alenson (76) and Mitch Thomas (54) saw the pair put on a 128-run stand that frustrated the Rebel bowlers.

Finally, Cranbourne Meadows struck back when Gagan Singla (1/45) dismissed Alenson to have Emerald at 4/223 and that started a Rebel revival.

The Bomber tail was wrapped up relatively cheaply as the Rebels got into a groove to have them all out for 269. Joraver Sidhu (3/37) was the pick of Cranbourne Meadows’ bowlers.

Chasing a strong total, the Rebels had five overs to navigate to end day one and did so successfully – they will begin day two at 0/12.

Cardinia will be looking for an outright win against Carlisle Park when play resumes on day two of their encounter.

The Bulls sent the Vikings into bat and it was a decision that paid dividends. Only David Nutting (35) and Gurpreet Soi (21) made inroads as Cardinia dismissed Carlisle Park for just 99 runs.

The Vikings lost their final eight wickets for 36 runs as Dwayne Doig (3/7) and Brad Tanner (2/4) wrapped up the tail with ease.

In reply, Cardinia will resume day two at 8/158 after strong contributions from Matt Celima (35), Brad Tanner (34) and Trent Wheller (23) helped the Bulls take a first innings lead. Justin Berry (22 not out) and Josh Browne (10 not out) are at the crease.

Michael Sinclair (5/69) was a man on a mission for the Vikings.

Nar Nar Goon/Maryknoll looks set for a win over bottom-placed Tooradin. The Seagulls elected to bat first and were in trouble early at 1/0 after opener Billy Antoniou (0) was dismissed by Dean Henwood without troubling the scorers.

Tooradin simply didn’t have enough firepower as only Michael Ralph (61) was able to put strong runs on the board. Henwood (5/22) put on a bowling masterclass in his 15 overs of work, helping to dismiss the Seagulls for 150.

In reply, Nar Nar Goon/Maryknoll stands at 0/27 after eight overs, with Sean Somers (25 not out) leading the charge.

In a crucial game for Officer’s finals chances, the Bullants will head into day two attempting to defend their total of 168 against Clyde.

Officer opener Ash Smith (34) was steady, and whilst others made starts, only Adam Reid (33) was able to join Smith in making over 20 runs. A balanced Clyde bowling attack saw three players claim multiple wickets.

In reply, the Cougars got through four tricky overs to end day one and will resume at 0/7.

With Pakenham fighting to stay in the finals hunt, Pakenham Upper/Toomuc showed no mercy as the Yabbies blitzed the Lions bowlers on day one of their clash.

Pakenham Upper/Toomuc – who is in a tight race for top spot – was absolutely ruthless as captain John Nooy (109) and Sahan Wijeratne (109 not out) partnered for an incredible 181-run stand for the second wicket.

Both were in deadly, but controlled form, producing 19 boundaries between them. Nicholas Kyval (32) and Ian Mortimer (30 not out) also added valuable runs to see the Yabbies post the massive total of 3/310 in their 80 overs.

The Lions – who are 12 points adrift of fourth-placed Kooweerup – will have plenty of work to do on day two.

Kooweerup, who could sew up a finals berth with an outright win, will be looking to do just that on day two of their clash against cellar-dwellers Gembrook.

The Demons won the toss, sent the Brookers into bat and immediately had their opponents on the back foot. Gembrook simply couldn’t find any rhythm against the likes of Ron Bright Jr (4/35) and Andrew Martin (3/12) and was dismissed for a measly 83 runs in just 28.2 overs.

In reply, Kooweerup got straight to work. The Demons were ruthless and Martin backed up his bowling with a terrific unbeaten 70 runs with the bat.

In no mood to mess around, Kooweerup declared aggressively at 3/148 to send in Gembrook for another bat.

With 22 overs faced, the Brookers will resume play on day two at 3/64.
The battle between two top three sides is living up to the hype with Lang Lang and Catani locked in an entertaining battle.

The Tigers elected to bat first and despite a slow start that saw them stand at 3/25, an 86-run partnership between Shero May (72) and Nathan Phillips (55) steadied the ship.

Further down the order, an unbeaten half century from skipper Ricky Caddell (59 not out) helped Lang Lang to a strong total of 9/251. Tyler Molloy (3/64) was the pick of Catani’s bowlers.

Merinda Park will be looking to defend its total of 202 when play resumes on day two against Nyora.

The Cobras were in strife, standing at 3/39, but a 123-run partnership between Thuduwage Kumara (81) and Grant Bloomer (39) got their innings back on track. Other failed to fire and with Tom Cottrell (5/42) in blistering form, Merinda Park was dismissed for 202.

In reply, Nyora faced 13 overs to finish day one and will resume play at 1/15.