The groundswell of support behind Caleb Serong as he prepares to make his AFL debut tomorrow night against the Gold Coast Suns should come as no surprise to anyone.

The young Fremantle midfielder’s incredible talent is matched only by his work ethic, and his strength of character.

The Serongs are great Gippsland stock – as genuine as the day is long, and with the spirit to match.

So it’s only fitting the family gets to mark his debut on the same day they celebrate his father Jamie’s 50th birthday back home in west Gippsland.

The 19-year-old, who was drafted with the eighth overall pick in last year’s national draft, won’t have his parents in the stands watching tomorrow – but as he told the Fremantle website, he knows there are bigger things at play.

“He’s given up a lot for me and I wouldn’t be where I am without him,” Serong said of his dad.

“And that goes for my mum as well. I think they’ll be really proud and I can’t wait to let them know.

“It would be nice to have them (at the game) but with all of the circumstances going on at the moment, we knew if I did debut I probably wasn’t going to be able to have them there.

“I know they’ll be watching from home and supporting me like they always have.”

The video of new Dockers coach Justin Longmuir breaking the news of Serong’s debut to him has fast become a hit online.

“As you can probably see, I can’t wipe the smile off my face, I can’t wait,” Serong told the Dockers website straight after he received the news.

“He (Longmuir) said to bring my strengths, just to approach the contest like I have at training, to work really hard.

“He said I’d been training well, so to take that out into game day and back my strengths.”

The team backing Serong stretches far beyond those he takes to the field with each week, and – combined – they’ve given him the belief to accomplish anything he sets his mind to.
Whether it’s through his close network of family and friends; his former teachers and school mates at St Paul’s Anglican Grammar in Warragul, or Geelong Grammar; or his former team-mates at Inverloch Kongwak, the Warragul Gulls, Gippsland Power, or Vic Country, Serong has never had to look far for support.

He’s spoken often with the Gazette over his footballing, and even cricketing, journey. And each conversation revolves around the same themes – a hunger for the contest, a relentless pursuit of excellence, and his love of his family and close circle of mates.

“You might only get one game or a quarter to really stand up in and make your mark.” – Caleb Serong

The Dockers know full-well they have a building block for the future because Serong is a footy perfectionist. The last thing he ever wants to hear is “keep doing what you’re doing”.

He’s continually on the hunt for ways to improve his game – acting as a sponge for any advice he can soak up.

It’s that trait, among others, that has him so well placed to succeed in the top flight.
The hard, uncompromising midfielder is a star seriously on the rise – there’s no two ways about that. Some have compared his playing style to that of former Freo jet Lachie Neale, and others to Port Adelaide star Robbie Gray.

Serong was last year named Vic Country’s Most Valuable Player, and received All-Australian honours in the NAB Under 18 National Championships.

He also co-captained the side, coached by former Gippsland Power mentor Leigh Brown, which came agonisingly close to winning the title – pipped at the final hurdle by Western Australia.

Serong’s leadership by example is clearly one of his standout qualities, and has been all through his staggering rise over recent seasons.

The Gazette spoke with him in 2017, after a badly broken collarbone he sustained as a 16-year-old still failed to dissuade selectors from picking him in the Vic Country squad just two weeks post-surgery.

He starred in that subsequent national carnival in Queensland.

“Back in the under-16s I was relying on what I’d already done and what they’d already seen to make the team,” he explained last year.

“Once I got to the championships, I just wanted to prove to them that they’d made the right decision to show faith in me. They kept telling me that the reason they picked me was because I was good enough, and they backed me in.”

Another show of faith, then from Brown and former long-time Gippsland Power talent manager Peter Francis, saw him selected in the under-18s for the Power later that year.

And his rise has been meteoric since. So much so, that he was among the first crop of prodigiously-talented youngsters to hear their names called out in the 2019 draft’s first round.

And it’s all come about through sheer, relentless hard work and determination.

Serong knows it’s about more than taking his chances. It’s about taking even the half-chances along the way.
“Sometimes that full chance never comes,” he told the Gazette after the Dockers drafted him.
“You might only get one game or a quarter to really stand up in and make your mark.
“If you go alright, then they’ll keep picking you. That’s when you take the opportunities you get and try to make the most of them.”

In 2018, Serong had a heart-to-heart about his game with Brown, Power high performance manager Matt Ross, and then AFL Academy coach and Brisbane Lions icon Luke Power.
“They just said I was playing really good footy and they were happy with that side of things, but it was just my body shape – they wanted to see if I could trim down a little bit,” Serong explained.
“It was just about trying to take it to the next level so I could make it to more contests out on the field.”

So, as he always does, he took that advice to heart and over last year’s pre-season did everything in his power to get himself into the best shape possible.
“People like Luke Power, Browny, and Matty Ross showing interest in me and giving me some of their advice, and what they think I should improve on, has really helped me,” he said.
“I just want honest feedback on what I can work on because I’ll never be satisfied – I always want to improve. Getting fitter and trimming up over the pre-season really helped me through the year.”

Serong explained the modifications he’s made.

“I kept putting on size (in the gym) so it wasn’t necessarily fat – it was muscle – so it was just about getting leaner and doing a bit more cardio, so boxing and bike riding rather than just doing bicep curls,” he said.
“It’s a fine line between doing too much, and doing too little.
“It just comes back to listening to people. You can’t just go through life thinking you know it all because a lot of time you don’t. Listening to that advice you get is really important.
“I want something I can work on to keep improving. As soon as you get satisfied or complacent, that’s when everyone either catches up to you, or you go backwards.”

The Dockers – currently in the Queensland Covid-19 ‘hub’ – take on the Gold Coast Suns at Metricon Stadium tomorrow night from 7.40. 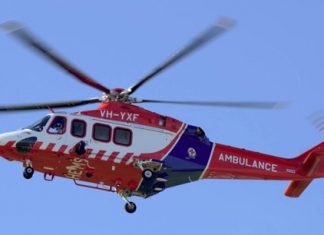 25/01/2021
A Clyde North man has been airlifted to hospital in a critical condition after he was thrown from the back of a Ute in...