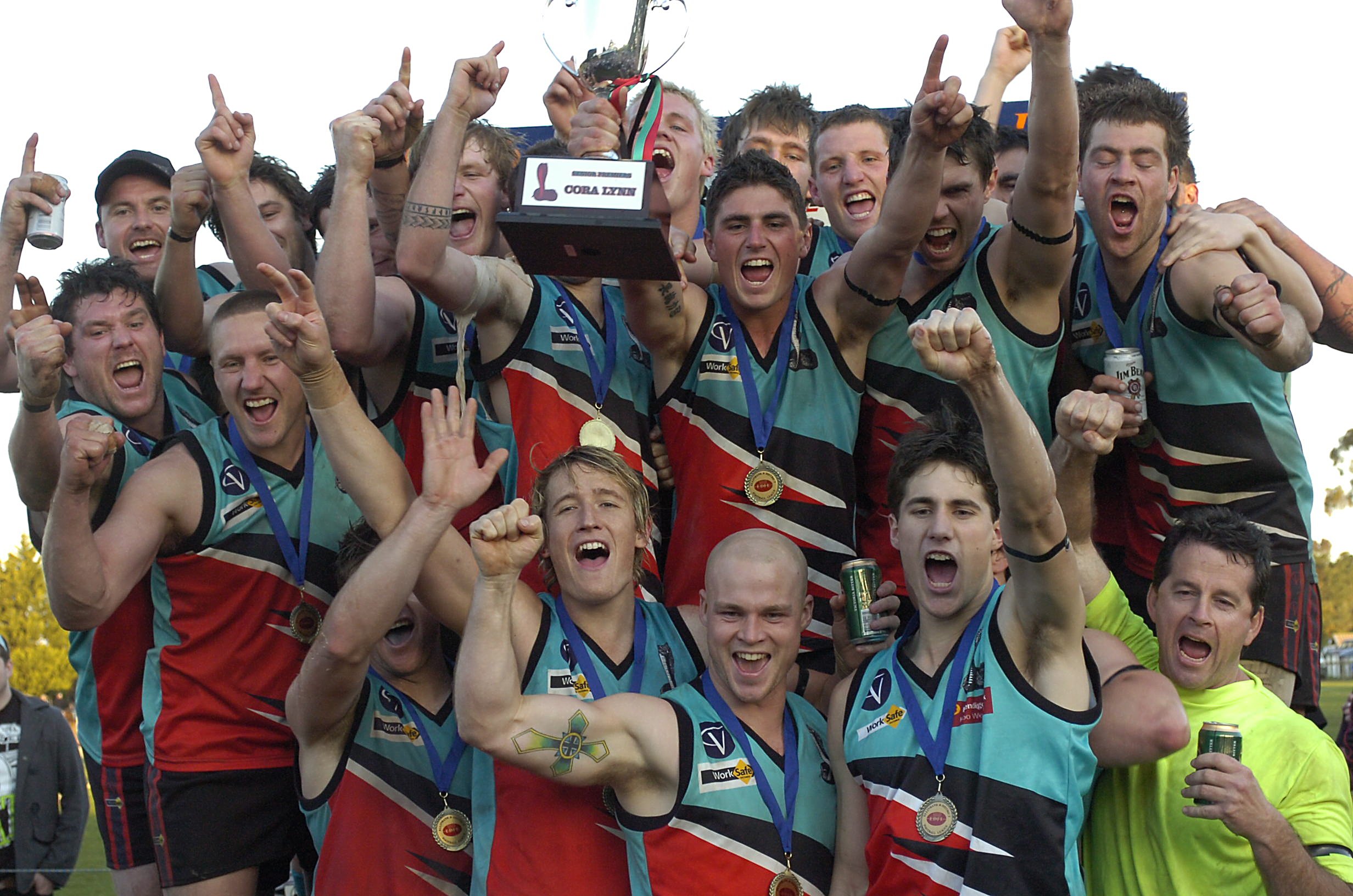 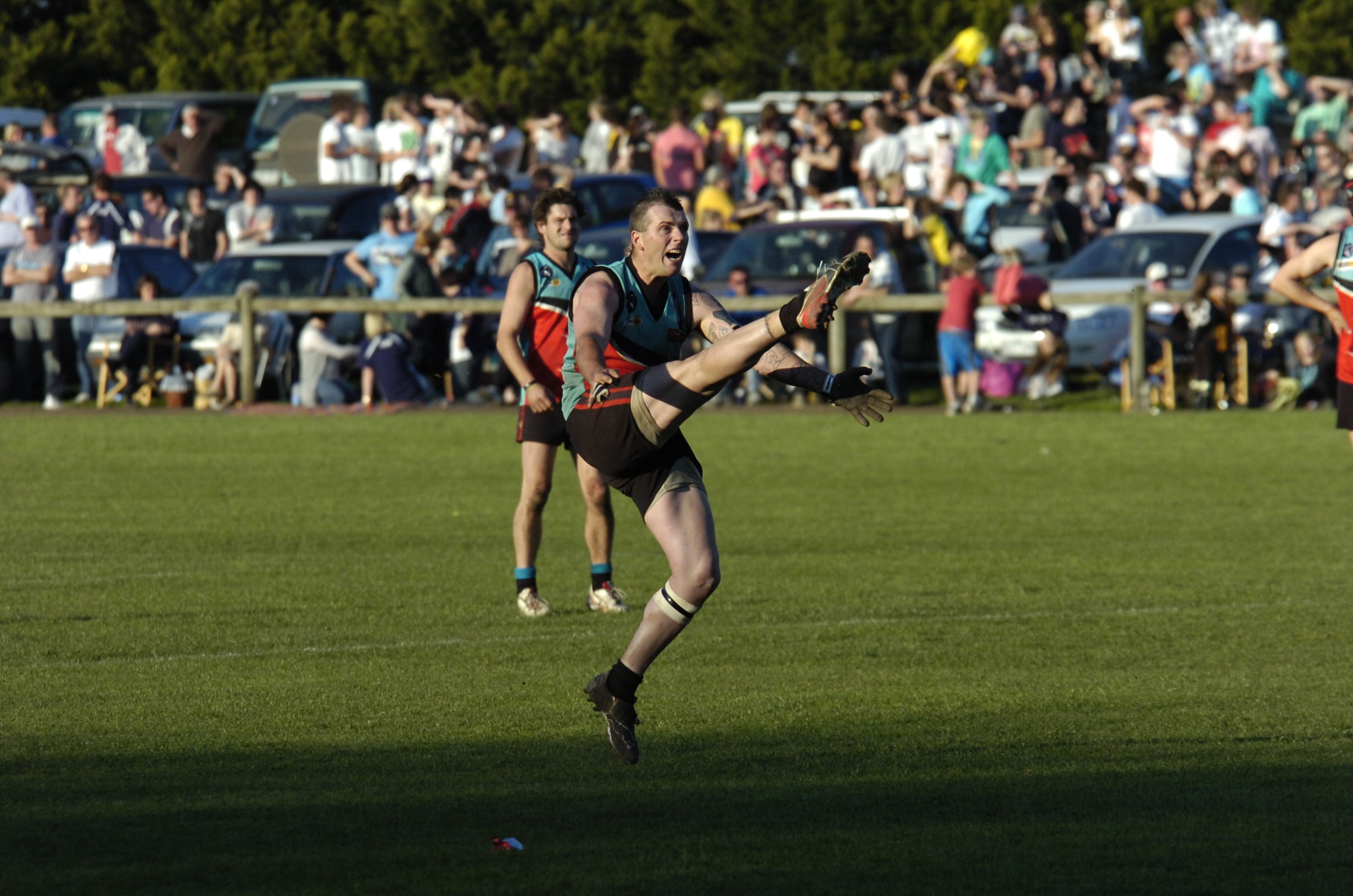 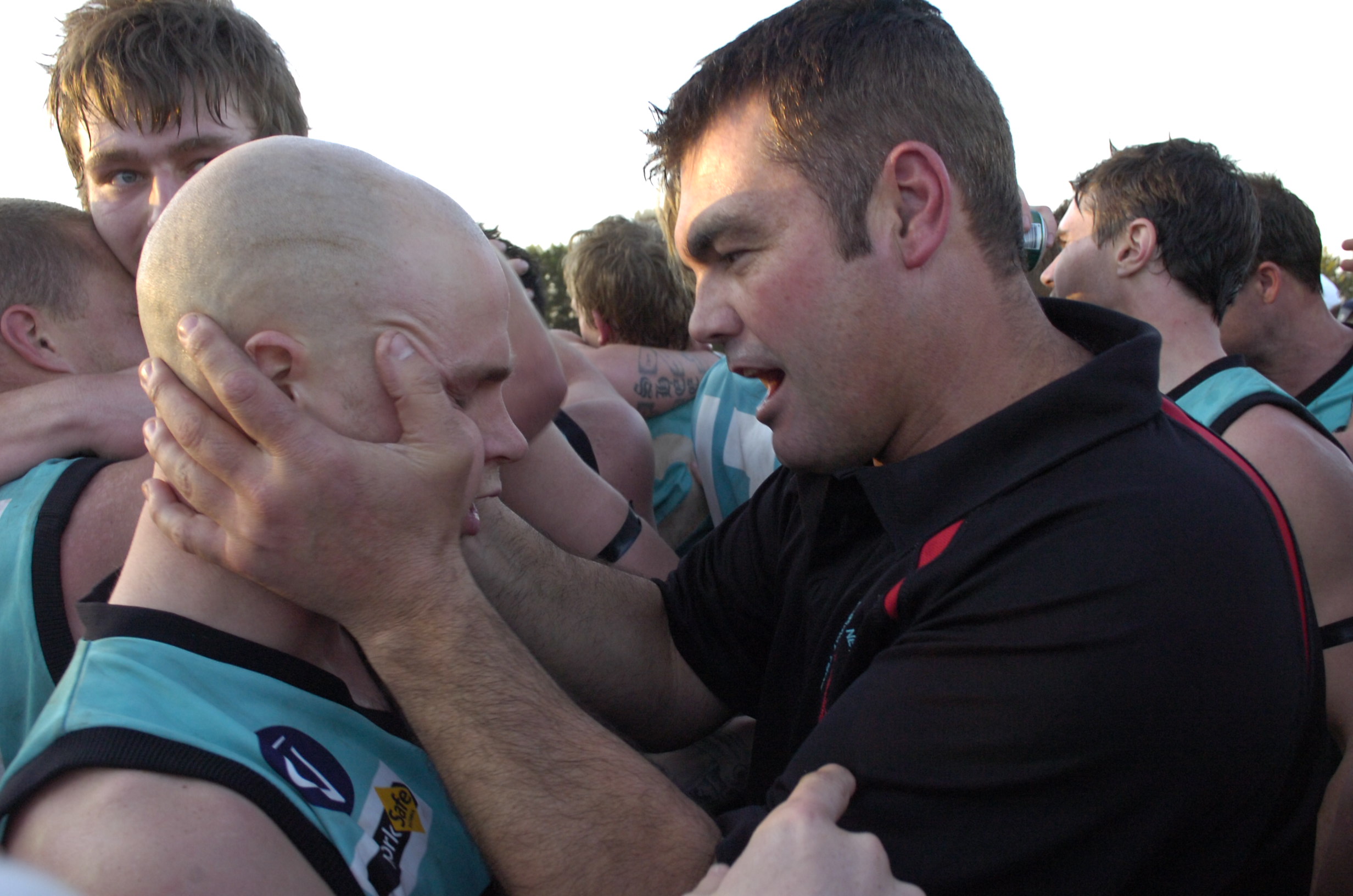 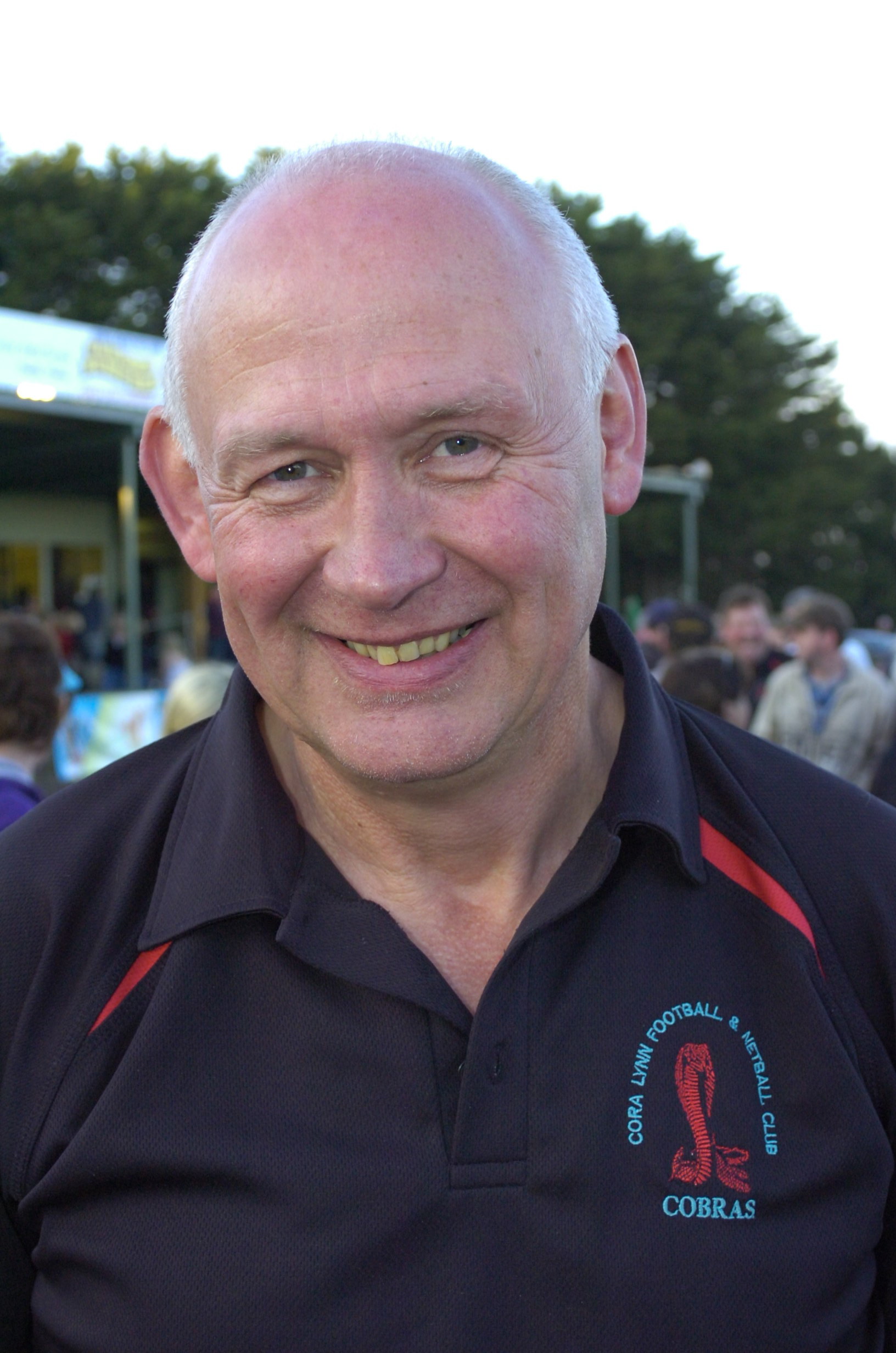 Cora Lynn broke a 22-year premiership drought with a 47- point win over Lang Lang in the 2008 Ellinbank and District Football League grand final at Cora Lynn on Saturday.

In front of a record crowd and in perfect conditions, the Cobras jumped to a 42-point lead midway through the first quarter and extended it to 52 points in the second quarter before Lang Lang absorbed the onslaught and worked its way back into the game to reduce the deficit to within striking distance at only 19 points at the three-quarter time.

However, Cora Lynn answered the Tigers brave fightback with the only four goals of the last quarter. After looking set for an easy victory in the first half Cora Lynn had to show all its qualities to win.

The Cobras justifiably deserved the flag, showed why they headed the ladder for 16 rounds and the victory was also a triumph for third year coach Chris Toner, who got his team to play with a fixed goal and unity this season.

“It’s a big relief,” Toner said after the game.

“All credit to Lang Lang, they worked their arse off and it was only in the last 15 minutes that I knew we had it, so power to them.

“We felt we were serving our apprenticeship over the last two years which culminated in today and a few things went our way over the finals series and again today.”

Cora Lynn’s two pronged attack, Ryan Donaldson, with eight goals and Darren Sheen, with three goals, made the difference. Donaldson read play superbly, reeled in many great marks and kicked vital goals at the start of the third and fourth quarters when the Tigers were threatening.

Sheen played across centre half-forward, also hauled in a number of strong marks and importantly both played in front and presented.

Ruckman Brad Horaczko was awarded the league’s best on ground medal and did well to negate star Tiger counterpart Dale Robinson for a good deal of time and offered plenty of drive himself.

In defence, Jeremy Duiker, Lee Dowsett, and Tim Payne all did the things that often went unnoticed and put in good contributions.

Not surprisingly, the Tigers appeared to have put all their energies into making the grand final and hence their slow start. Clint Fulton was the best of the Tigers and perhaps the only Tiger to make an impact each quarter.

Brett Hameeteman across half-back and Loughridge, Blake Batt, John Thwaites, Dean Brown and Jake Dwyer all tried their hearts out. Ruckman Dale Robinson played an inspired third quarter, Kurt Batt and Luke Franklin flashed in and out and were often crowded out when they went close the ball and would have made a bigger impact if not for some poor kicking on goal.

“It was a poor start and we had to play catch-up footy,” said a disappointed Lang Lang coach Clint Evans.

“To our credit we kept coming but ran out of legs in the end. They were the better side and their midfield killed us early, which made it easy for their forwards.”

After finishing seventh last season Lang Lang deserves praise for its improved season and a tremendous final series that saw the Tigers attain a grand final berth from an elimination final, which is no mean feat.

After Cora Lynn’s 2008 premiership success, Ken Moore spoke with an elated hard working Cobra president Andrew Bergmeier. While he was more intent on praising others for his club’s resurgence in recent seasons, make no doubt, Bergmeier, who has occupied the presidency for five seasons, has
played a major role in the Cobras revival which culminated in Saturday’s superb performance…

Ken Moore: As president of the club you
must be proud of the boys?

Andrew Bergmeier: This is a dream come true! Three years ago we started to believe we could be competitive and we knew we had to get the structure right and knew we had to get the right people around us and people that wanted the club above the individual. We tried hard to put in place formulas to succeed as far as running a football club is concerned and we are also very grateful to the E&DFL for allowing us into the league under very difficult circumstances in 2005. We knew when we got into this league we had to be super competitive and must admit the standard and the pressure of the league surprised us and the support the league had amongst their clubs also surprised us and we had to take that all aboard. We had to rebuild our own club because our club was teetering on termination at that time and then we had to work out the best way to go about that and that has taken along time.

KM: You’ve summed up a good deal of my next question on trials and tribulations!

AB: Well speaking of those, I’d like to say a little bit about that. I believe if we got the structure right off the field then we would be successful on field and success will bring you success as evidenced today. The secret of on field success, which was especially important to us in an isolated spot, is to get a coach that can bring the right players and I am very, very proud the say that Chris Toner out of everybody in the club through his dedication and his maturity and the way he operates has been a fantastic asset to us.

KM: Can you share with us some of the people behind the scene that have played a big role keeping the club ticking over the last two decades?

AB: I’d like to make a special mention to Kevin Beilby, who many say is the heart and
soul in our club, I’d like to make special mention to Terry Dillon, not too many clubs that have a bloke second in charge at an AFL club and he has been a great mentor through all of this process and is passionate about Cora Lynn. John Cunningham has provided enormous support in welfare issues and John Johnson has established our credibility in the
league which has been very low at times and has done tremendously well with a very special role as junior coordinator and we have picked up in those areas. I’d like to single out Tanya Duiker, who as president of the netball club has also taken on a number of highly complex roles. Of the current crop, Carolyn and MarkMcMillan and their helpers, too many to mention, have rejuvenated the canteen after the previous family did such a magnificent job. I’d like give a mention to Gary Fisher who doesn’t have any ties with the club anymore but has helped in a sensational manner as gate manager and in many other jobs. Peter Parker and Norm Dalziel and the Cora Lynn Recreation Reserve maintain this ground in immaculate condition and they are all volunteers and all are self motivated and
such was Peter Parker’s desire to make the ground perfect he probably cut it six times
for today’s match.

KM: It was a great occasion today and a record gate and your club had a huge role hosting proceedings?

AB: I said to Max Papley today that at sixthirty this morning there were fifty volunteers and that was maintained through the day we kept having people coming in and every one of those did us proud. There were so many people that chipped in and wanted to be here and they were just magnificent. It was a great day!

KM: Thanks Andrew and congratulations!