Gembrook Cockatoo expects each round to bring different challenges, but is confident it has what it takes to do some […]

Gembrook Cockatoo expects each round to bring different challenges, but is confident it has what it takes to do some damage in the AFL Outer East’s Division 1 competition in 2021.

The Brookers are up from Division 2 – where it placed fourth in 2019 – and understand just what is coming as they gear up for Division 2 reigning premiers Seville on Saturday 17 April.

“It’s good to get Seville first up being a team we played (in the 2019 season), it’ll be a good gauge of where both of us are at,” Brookers coach Brad Coller said.

“It’s good because we respect the unfurling of their flag a little bit more than if they were playing another side, so we’ll pay our respects to that, it’s a good achievement, and that’s where we want to get to.”

Coller said that his developing group was itching to get back into the swing of competitive football after a year off.

“We’ve got such a young side, everyone’s kind of jumping out of their skin to get going,” he said.

“It’d be a bit different if you were an older team where they probably appreciate that time away.

“But our guys are just hanging out to play to be honest. We can’t wait.”

The Brookers have secured the majority of its 2019 playing list once again, with just a handful of names departing the club – such as ex-AFL pair Hamish McIntosh and Tarkyn Lockyer – but Coller expects the senior core to stand up, and talented youngsters around the club to take the next step.

The Brookers’ under 18 side in 2019 was also unbelievably impressive, winning 11 games and making a semi-final in promising signs for the future.

But the Brookers have secured the signature of one serious local footy name – ex-Berwick champion and premiership skipper Michael Harold.

Multiple best and fairests, premierships, interleague matches – the midfield star is a serious addition to the division this season.

He’ll be a handful and a half for opposition players and coaches.

Coller said that the club was absolutely thrilled to welcome in Mick after a couple of years off football, not just from an on-field perspective, but the standards he’ll set off-field too.

“I went and watched him when he was winning flags for Berwick, he’s always been a champion bloke too and an incredible player so its massive for us,” he said.

“He came to training to run one of our fitness sessions, and then after training he said ‘I wouldn’t mind having a run’, and I nearly fell over because I tried to get him in ’19 when I started.

“So he came to me which was really good – Mick’s a great leader, he was captain there (at Berwick) for a reason and played some great footy for a long period of time.

“For our young list, he’ll be great, and he’ll help us develop even more with the likes of Spud (Michael Firrito) and a few others as well.”

The Brookers have also added Brayden Weller from Cora Lynn and Tyler Joosten from Nar Nar Goon, as well as welcomed back Braden Wood from Emerald.

With the Brookers to kick off its season in a matter of days, Coller said that he expects Division 1 to be remarkably competitive, and one where you simply can’t drop the ball at any stages.

“I look at three competitions (in 2019) and I think Division One was the most even,” he said.

“Both Premier and Div 2 had two or three really quality sides and then it sort of fell away, whereas Div 1, I know from speaking to a few guys involved, you rock up every week not knowing if you’ll win or lose.

“It’ll be similar this year, both Seville and us have improved – Berwick Springs is probably the unknown, starting from scratch will be tough, but they have some good juniors coming through so hopefully they’re up to it.

“But it’ll be even, Monbulk and Officer probably are the benchmark, but we like to think we’ll be really, really competitive.” 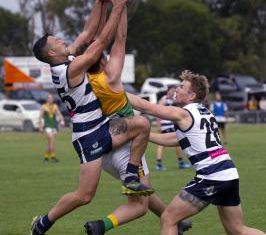