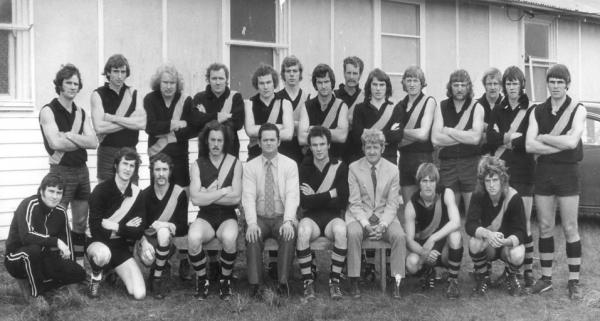 In these gloomy times, it’s very pleasing to have a good news story to share and we have just that […]

In these gloomy times, it’s very pleasing to have a good news story to share and we have just that with the discovery of a treasure trove of trophies belonging to the late, great Alby Milner – one of Beaconsfield Football Club’s most popular players in the 1970s.

Alby Milner started with the Beacy seniors back in 1970 as a young 17-year-old and went on to experience premiership glory in 1974, as well as kicking over 100 goals with the seniors in 1973. His blonde hair and great hands made him one of the best-known and popular players in the old South West League days.

Alby sadly passed away from illness in 1991 at a very young age.

His trophies were found by a Cameron of Pakenham, as a result of a search of his ceiling space to fix a bird problem. As a former footballer, Cameron understood the importance of footy trophies and, though they were covered in dust and some were in need of repair, he was determined to find out more about the trophies’ owner.

There were eight trophies and a medallion dating between 1966 and 1976, all with the ‘A. Milner’ name and a variety of clubs from ‘Wedge FC’, to ‘BFC’, to ‘BCC’. Cameron’s search uncovered a likely owner in Alby Milner, who featured in a lot of Beaconsfield Football Club history as a member of the club’s ‘Team of the Half Century’, named back in 2000.

Cameron’s follow-up with our Past Players and Officials Facebook page provided proof and we were able to put him in touch with Alby’s wife, Debbie, who was both thrilled and emotional to learn of the find.

It appears the trophies had been put away by Alby in the roof over 30 years ago and left there after the family moved away. Debbie was so grateful to have these mementoes to share with Alby’s daughters, Stacey and Kirsten, and the grandkids as evidence of his sporting prowess as she had no other trophies of his.

The trophies ranged from under-13s runner-up best and fairest in 1966 with Wedge FC in the DDJFA, to the C Grade bowling average with Beaconsfield Cricket Club in 1976.

Well done to Cameron for his persistence and kindness in finding the rightful home for these trophies, for which Debbie and the family are so very grateful.

Us old timers are also glad for these reminders of a much-loved teammate. Go Beacy.