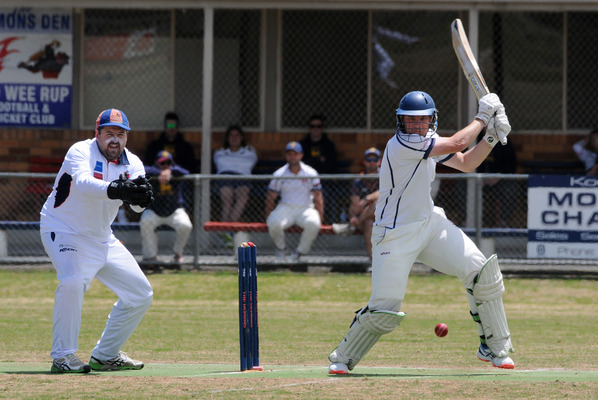 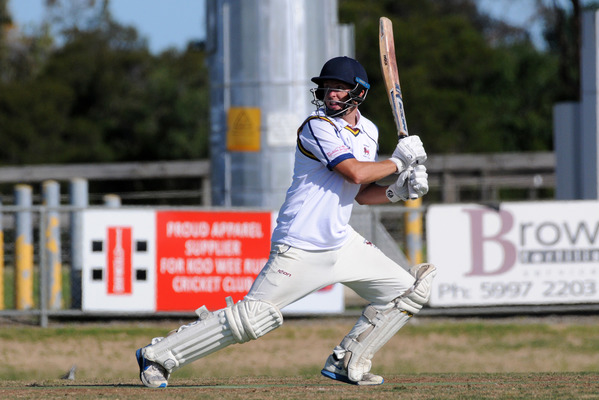 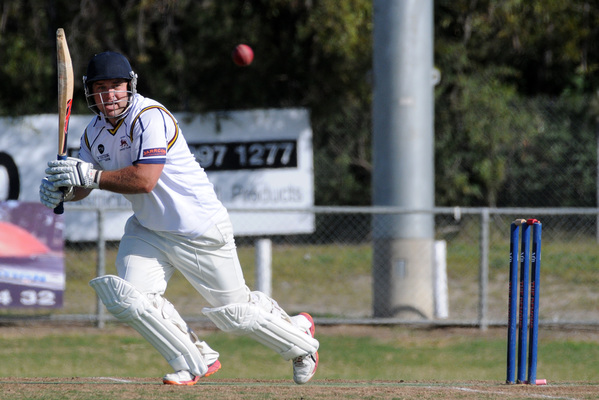 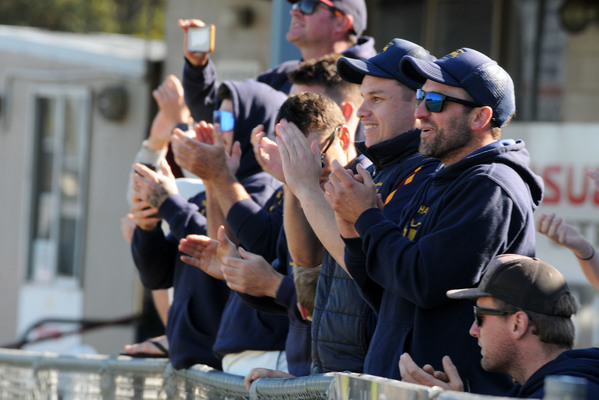 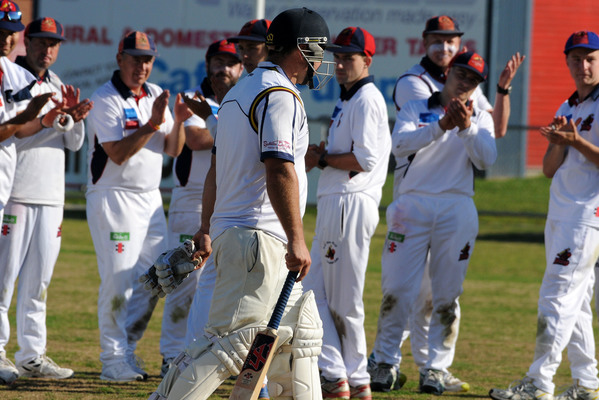 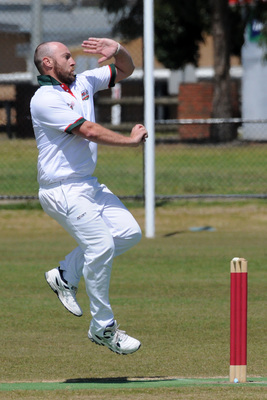 If Dale Tormey is the best batsman in the West Gippsland Cricket Association, then Chris Smith is the best to watch in full flight.

And, thankfully for a small group of onlookers, they got the chance to watch both go to work on Saturday in a grand final rematch for the ages against the Demons at their Denhams Road fortress.

Pakenham and Kooweerup have more than just a knack of producing memorable contests – it’s become part and parcel of their rivalry.

They simply don’t do ‘ordinary’.

And what’s become a trademark for both core groups in recent years is their remarkable ability to snatch victory from the jaws of defeat.

The Round 6 clash between the Demons and Lions was irrefutable proof of that.

Chasing Kooweerup’s imposing day one total of 9/342 – after losing a Kookaburra Cup Twenty20 clash against them during the week – the Lions were nothing short of extraordinary with bat-in-hand on Saturday.

After losing the super-experienced Ben Maroney early, triggered for just 1 off the bowling of the WGCA’s most proven spearhead in Jess Mathers, Pakenham produced two incredible partnerships that steered the side home in famous scenes.

The first was between Jack Anning, and Tormey.

With a super-fast outfield making life difficult for even the most capable Kooweerup fielders, the Lions took full toll – and it was Anning who set the tone early.

Producing a series of cracking drives, he transferred his weight brilliantly – coming forward against both spin and pace alike, but also rocking back and piercing the field square of the wicket where possible.

His was a type of confidence that his Lion brethren fed off as they watched on boundary-side.

He even played the leading hand in his 101-run second wicket stand with Tormey before his untimely run-out.

And when he left the field, his expression said it all – after hitting 10 boundaries in his knock of 55, he knew there were more runs out there for the taking.

And Tormey and Smith combined brilliantly to score them.

Tormey, the reigning Terry Stephenson medallist as the best player in West Gippsland’s top flight, was dropped on 20 – a juggled chance square of the wicket on the off-side.

And if there’s one player in whole of west Gippsland cricket – not just the WGCA – who’ll make a side pay for their missed opportunities, it’s Tormey.

The powerful stroke-maker got to work doing what he does best in a practically chanceless innings from that point on – finishing unbeaten on 173 as the Lions ultimately reached 3/348 with five overs to spare.

Tormey’s imperious knock almost had to be seen to be believed as he belted 26 boundaries, including three sixes – one of them striking umpire Peter Madden’s vehicle in the carpark.

‘The Chief’ was clearly in command, and provided the perfect foil for an innings that would have – in any other week – been the absolute highlight of the round.

Chris Smith, himself a former Terry Stephenson medallist for the Lions, hadn’t played at all this season prior to Saturday.

But he answered the Lion call in the best way imaginable with one of the most classical tons in recent WGCA memory.

‘Little Chris’ has all the strokes in the book, and the timing to match. He’s equally at home against pace or spin, and either on the back or front foot.

Local onlookers have marvelled at his ability for years, and on Saturday he delivered a stark reminder of just what he’s still more than capable of.

Smith’s 106 came as part of an astonishing 231-run stand with Tormey that took the game right away from the Demons, and it was almost unfortunate that his knock came to an end with his side in sight of victory at 3/337.

After the match, there was almost a look of resignation on some of the Kooweerup players’ faces – certainly not that they’re not good enough, everyone knows they are, but that they just weren’t good enough on the day.

In this battle of two of the competition’s best batsmen against its best attack, the two batsmen won out – and in style.

Square cuts and cover drives to the fence, or slaps to mid-wicket over it – this display had the lot.

It was just one of those days were there wasn’t anything to do but stand back and admire what was being produced.

In the wake of the clash, Lions premiership skipper Rob Elston dissected his side’s incredible performance.

Despite the Demons piling on the runs on day one, and knocking off the Lions in the Kookaburra Cup during the week, Elston said his group never lost belief for day two.

“We realised that we hadn’t performed to our best in week one, particularly early (we conceded 17 fours in the first 20 overs), but we did work our way back into the game,” he said.

“Although we weren’t successful on the Tuesday night in the T20, I really feel that gave us momentum going into Saturday.

“A total of 342 is a really significant chase and you need everything going your way, but we knew the ground would be relatively fast, the boundaries aren’t the biggest in the comp, and that if we batted our overs and took the game deep that we would be in it up to our ears.”

Unsurprisingly, Elston was full of praise for the man of the moment – Tormey.

Despite the years of high-level cricket Tormey has played to this point – including at Victorian Premier Cricket level – Saturday was the biggest chase he’s been involved in to date, and his partnership with Smith was the biggest he’s contributed to.

“I think the thing with Dale is he has super confidence in himself in any situation – he just needed enough guys to go with him and he found some great allies in Anning and Smith for company,” Elston explained.

“When we got out preparing for warm-ups I said that we know what the end result we need has to be – but how are we going to achieve it?

“Everyone got involved and chipped in with the things we needed to do. This set a great scene with everyone on board, believing and wanting to do that one per cent that can help their team mates to achieve the result.

“While not actually out there making the runs, we had first year player Jacobus Hynes score all day. He didn’t ask for a break, and took it on himself – that was how he could contribute. We had players running drinks, high levels of encouragement from the sidelines, anything anyone could do to help their mates.”

“He is not only batting for long periods of time but scoring as well,” he said.

“Jack and Dale had a partnership of 101, of which Jack made at least 50, so he was able to keep pace with one of the most destructive batters in the competition. There’re a lot of players who work hard and Jack is certainly one of them, but now he’s combining hard work with understanding what he needs to be able to do to be successful.”

And Elston was also quick to praise Smith’s incredible ton.

“For someone to miss the first six games and come in and play like they hadn’t missed a beat is very surreal,” Elston said.

“His record speaks for itself and he certainly is the player of the generation in the association.

“I know how much Dale enjoyed having him in the team and batting with him today and that partnership will be something everyone who witnessed it remembers for a long time. His importance to the team goes above just runs, wickets and his fielding though – he’s a brilliant person who just loves the club, the people within it and being in the environment.”

“Dale is the ultimate professional,” he said.

“He made a hundred in the T20 regional game we played against Langwarrin, and next training night he was the first one there hitting balls on the bowling machine.

“All the players in the club try and tap into his knowledge and expertise, and he’s very generous with his time. His playing ability is only part of the story, with him being a leader and holding everyone to a high account to be their best to help the team and club be successful.

“He certainly was one of the main reasons for the victory on the weekend with his ability to hit gaps putting pressure on the bowlers and giving his batting partners a lot of support and keeping the game well in hand. I’ve been involved in a few run chases over the years, but never felt more comfortable than in this game with Dale at the crease.”

A loss on Saturday – which seemed a very real probability to most after day one – would have buried Pakenham in the chasing pack, but the win has given them huge momentum moving forward.

“Both teams will think that they can do certain things better going forward, and that’s what we’ll be aiming to do – get better every week and put ourselves in a position to play finals and challenge at the end of the year,” he said.

Two of the other three games of the Premier round on Saturday produced predictable results, with Devon Meadows (153) no real match for Tooradin’s 8/312; and Clyde (3/170) storming to a clinical win over Cranbourne Meadows (156) courtesy of fine half-centuries to Jason Hameeteman (86) and Kane Avard (56 not out).

But in the other clash of Round 6, which could have real ramifications come the end of the season, Merinda Park secured a memorable home win over perennial Premier grade finalist, Cardinia.

Daniel McCalman led the way for the Cobras on day one with his stellar 115, while on day two it was Paul Stockdale and Sasindu Perera who led the way.

Stockdale toiled hard for a mammoth 37 overs, ultimately finishing with 5/117 to his name, while Perera claimed 4/28 in 21 super impressive overs of his own.

Unfortunately for the Bulls, too much was once again left up to Alex Nooy (81) at the top of the order. Matt and skipper Bradey Welsh (35 and 36 respectively), and Brad Reiner (19), Travis Welsh (13), and keeper-batsman Dillon Allen (21) all got starts but fell at inopportune times their side finished its 80 overs on 9/229.