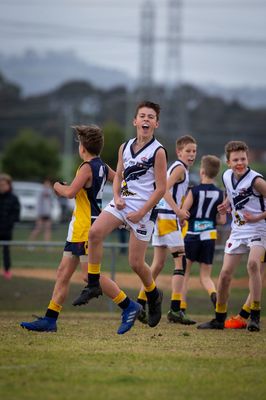 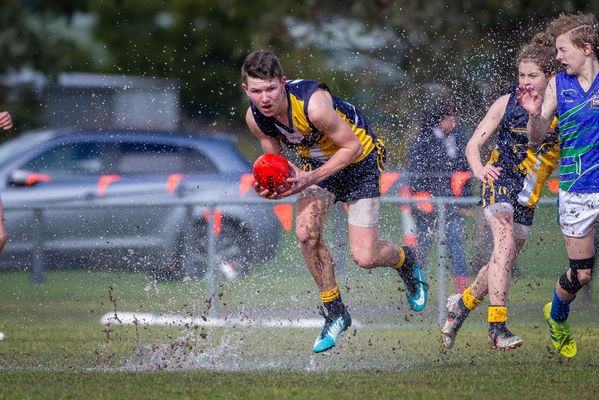 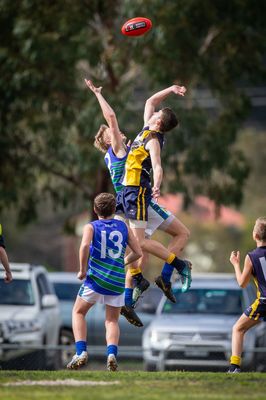 It’s that time of the year again, with the South East Juniors finals series officially getting underway on Sunday, and once again, the youngsters across the region get their chance to shine on the big stage.

Berwick White got off to a terrific start to the finals of the Under 13 Red division, defeating Beaconsfield White at Sweeney Reserve, 4.7 (31) to 3.3 (21).

The Berwick side got off to a perfect start, kicking three unanswered goals in the opening term to open up a 20-point quarter time, and despite the Eagles fighting back to play some excellent footy across the final three quarters, couldn’t quite get in front at the final siren.

For Berwick, Ryan Walton was outstanding with two goals, while Liam Petherick and Brodie Lawrence hit the scoreboard. For the Eagles, James Lee, Chris Inverno and Heath Godwin tried hard and kicked a goal each.

Pakenham Maroon was also irresistible, kicking for goal brilliantly on the way to a semi-final win against Narre North Foxes Black, 16.3 (99) to 0.0 (0).

Tarkyn Nicholls took his season goal tally to 32 after a big bag of six majors, while Jackson Miszkowiec was the perfect foil for Nicholls with four goals himself.

Both sides were fairly even at half-time, but the Lions got the jump with a two-goal third quarter, and holding Berwick Springs scoreless.

Berwick Springs fought out the game well, with Radovan Rakonjac slotting two goals, while for the victors, Levi Ducasse and Patrick James Miller each kicked two.

Down at Narre North Reserve East on Sunday in horrendous conditions, Beaconsfield Gold got its Under 14 Red finals campaign off to a perfect start by defeating Berwick Springs Blue, 2.11 (23) to 2.3 (15).

The Eagles and Springs did battle in a great semi-final contest, with the lead changing a lot in the first half, but the Beaconsfield side surged ahead in a two-goal second half to pick up the win.

Kobe Shipp and Josh Allan kicked a goal each in the terrific win, while the likes of Sam Frangalas, Christian Kassanis and Kyan Buselli tried hard for Berwick Springs.

The Lions got out to a 19-point lead at three quarter time, but Berwick fought hard in the final quarter to just fall short.

Sam Woodward was particularly good for Berwick with two terrific goals, while for the victors, Jack Wilson, Jonty Miller, Dylan Armstrong and Ethan Paul each kicked a goal.

The Seagulls led at every change and took a very handy seven-point lead at the final change, but the Eagles almost got the job done in a thrilling last term.

The Kangaroos did a superb job all day, taking an early lead and never letting their foot off the pedal, with Brody Chase and James Adams each kicking three brilliant goals.

The Foxes had winners all over the ground, but Mitchell Scriven was particularly excellent, kicking four goals to take his tally to 34 for the year. Luke Butcher also kicked two goals.

With Spencer Robertson (four goals), Colby Pernar (three), Mitchell Szybkowski (two) and Jesse Morton (two) firing up forward, the Eagles were dominant despite the Foxes not giving in all day.

Braedyn Bowden starred for the victors with four goals and Jaxon Binns kicked three, while for the Springs, Brock Walker made life difficult with four goals.

The Eagles could have won by plenty more, but put in a tremendous performance, with Brodie Cox causing issues with his three goals. For the Lightning, Josh Finnegan kicked a goal and battled hard all day.

Despite kicking more goals than the victors, the Foxes couldn’t quite get the job done, but held their own for the majority of the day.

For Berwick, Jesse McCutcheon kicked two goals to be a force up forward, while Lachlan Devenish and Isaac Seskis each kicked a goal.

Officer got off to a fast start, kicking seven goals in the first quarter but then the Foxes kept them scoreless in the second and third quarter.

In the other final, Beaconsfield Gold and Pakenham Maroon played off in a close fought game before the Lions snuck home with a 5.12 (42) to 4.5 (29) win.

Bailey Harris, Cooper Neal, Archie Drury and Kobe Stott were all working hard for the Eagles in the big game, while Darcy Freeman, Logan Brown, Dylan Blake and Chevy Simpson all tried their hearts out for the Seagulls.

Caleb Myers, Ashton Jack, Lucas Anile and Jordan Jacobs were all very good for Noble Park, while Bailey Martin, Nicholas Santo and Ethan Kung were all terrific for the Lightning.

The Kangaroos will now play in the grand final in two weeks after really strong games from Joshua Murray, Ryan Warne and Cody Lucas. Fountain Gate tried their best, with Riley Hill, Noah Riley and Taylor Paul all working hard in the defeat.

Owen Brady, Archer Wilson and Rhylee Morris were all exceptional for Berwick Springs while Luke Daly, Bryce Kirby and Mitchell Rice were all hard workers for Berwick North.

The Beaconsfield derby between the Blue and Gold teams didn’t disappoint in Under 12 Red with the two sides competing in an excitingly close match.

Noah Kilpatrick, Dylan Vogrig, Kayleb Lovett, Sullivan Robey, Jordan Gwin and Matthew Cross were all tremendous for the Gold side. Korban Stone, Jack Hilton and Ryan Fox were all hard workers for the Blue side.

Jacob Battams was amazing with his two goals for Kooweerup while his teammates in Jackson Neal, Cooper Davey and Tristan Dyer all played great games.

Charlie Stone, Kaelen Henry and Benjamin Booth were all hard workers for Beaconsfield.

Kooweerup will play Lyndhurst Orange this week for the last spot in the grand final.

Brody Hoppner was terrific for Narre as was Tyler Murphy and Cooper Cullen. Parkmore was lifted by the efforts of Jai Faavae Sasalu, Denis Gega and Jai Bartlett.

Parkmore and Berwick Springs will face off this week in the preliminary final.

The Kangaroos made a comeback after a slow start which was sparked from the amazing effort from players such as Grace Norton, Jayla Young, Abigail Baker, Sienna Walker and Chloe Duffy.

But Cranbourne held on for a strong win in the end from big games from Sophie McCarthy, Karla Woodman, Marlie Wood, Emily McDonald and Asha Kennedy.

Unfortunately, Officer has been knocked out of the finals, but the Roos can hold their heads high after a very encouraging year.

In Under 14 Girls, the Beaconsfield Blue girls team became the second girls team from Beaconsfield to make the grand final on the weekend when they hung on in its close game against Berwick White, 4.5 (29) to 4.3 (27).

Berwick made a comeback in the third quarter to hit the front but were unable to hold on against a very strong Eagles side.

Jasmine Nation was inspirational for the Eagles with two goals while her teammates in Hailie Pastras, Ashlee Quinn, Ruby Langham and Makenzi Evans worked really hard.

Pakenham were leading at the final huddle but were unable to hold on in the last quarter – Shanea Hawker kicked two special goals while Olivia Frost, Alyssa Hobson, Reigan Shaw and Hayley Percy were all fierce competitors for the Lions.

Georgia Malkoun and Olivia Magri continued their remarkable seasons into the finals with two goals each, while Emma Shaw, Jemima Sheedy and Ashleigh Coutts worked hard for the Eagles.

Brooke Smith, Amber Clarke, Courtney Siwes and Madilyn Hanna all kicked a goal for the Foxes while Sienna Anderson also competed well around the ball.

Pakenham Marron played one of their best games for the season when they beat Endeavour Hills/Narre North, 6.8 (44) to 0.0 (0).

Abigail Banks booted two goals and played one of her best games for Pakenham while Tylah Burn worked hard for her teammates.

For the Eagles, despite not getting a score on the board – they didn’t lose any supporters trying their hardest until the final siren.

Lucy Thea, Chloe Rundle and Ashleigh Pace were all among the Eagles players who tried their best.