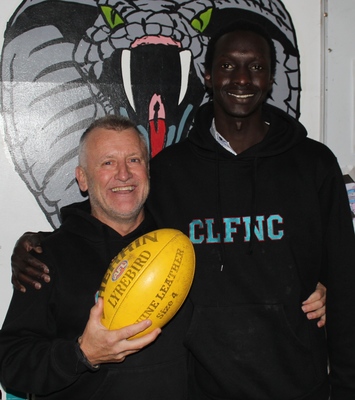 “Everyone has a different journey – it’s how you travel along your journey that counts.” For Lado Alphonse, and more than a dozen other young Sudanese-Australians who call Cora Lynn their footballing home, footy is so much more than a game. The Gazette first spoke with Lado in mid-2014, after he’d embarked on a sporting […]

“Everyone has a different journey – it’s how you travel along your journey that counts.”

For Lado Alphonse, and more than a dozen other young Sudanese-Australians who call Cora Lynn their footballing home, footy is so much more than a game.

The Gazette first spoke with Lado in mid-2014, after he’d embarked on a sporting journey of a different kind – in the unique world of floorball.

“Basically I had two different kinds of traditions and customs growing up,” he said at the time, of his childhood in both Sudan, and Uganda.

“I’m Sudanese but for security purposes we had to flee to Uganda – it was the closest, safest place we could get to, so the whole family moved.”

Lado, along with seven of his family members, fled to Uganda quite literally fearing for their lives.

“It was instinct – you’d hear a gunshot and know if it was close by or not, and whether you should go for cover or just run away. It was crazy.”

Lado could vividly remember everything he witnessed, even as a young child.

“I was very young, maybe eight or nine, but I still remember everything from back then,” he said.

“Once you see something as a child it takes you a long time to forget.”

Since 2016, Lado has become a key figure to the Cobras and their make-up as an inclusive football and netball club.

It’s not something that many would associate with the tiny country town that seems like it’s half a world away from everywhere.

But for Lado and many of his young friends, and team mates, it really is half a world away from their war-torn upbringings.

It was through a bond formed with Cora Lynn legend Michael Dillon while the pair were working at a local Officer school that Lado became a regular fixture at ‘The Cobra Dome’.

And since then, a number of other young players of African descent have followed him to the club.

For the past few years, Cora Lynn club members such as Michael Dillon and fourths coach Steve Mortimer have travelled to various suburbs throughout the south-east to pick up these players and drive them to games – often arriving at Cora Lynn as early as 6.45am on a Saturday.

“Everyone grew to love him straight away,” Michael said of Lado’s arrival at the club.

“He’s got modest footy ability, but he’s a captivating person. Andrew (Bergmeier), our president, describes Lado as the heartbeat of our reserves side.”

Last year there were a dozen Sudanese players on Cora Lynn’s lists.

Many of those are now playing in both the under-16s and under-18s on the same day.

“After they’d played in the fourths and the thirds, they went out the back and got the boxing gloves on and started punching the living suitcase out of each other during the seconds!

“They have so much energy, it’s so great to see around the club.”

One such player, Riak Akoi, has starred this season in the thirds – so much so that he was unlucky not to be selected in the WGFNC’s under-18 interleague side earlier this year. His rate of development since first joining the club has been nothing short of remarkable.

But the reason for the ear-to-ear grins etched all over the faces of Lado and so many of his friends is as much about the off-field as it is on it.

They love the sense of belonging they feel in the tiny west Gippsland hamlet.

“It’s the hallmark of Cora Lynn – to accept people and players that other clubs haven’t given opportunities to,” Michael explained.

“We hear so many negative stories about African refugees. These guys have been at our club for three years, they’re highly-spirited people and they’ve not put a single foot wrong.

“A lot of these players were born in refugee camps in the likes of Egypt and Kenya after their parents fled Sudan, while others were born in Sudan. They’ve had a tough start to life, but this is just a great community story, and a fantastic story of integration.

“No one has ever said anything adverse or complained about them. They’re very respectful guys – they understand what a sporting field is. They compete really hard and they know how to lose with dignity and grace.”

There was an instance in the not-too-distant past where Lado was racially vilified on-field by an opposing player. His breathtaking response was to give him an accepting hug.

“We can all put our imprint on the club, and see what happens from there,” Lado said of being accepted with open arms into the Cora Lynn culture.

“In a few years’ time, we can sit around and realise we’ve played our part in a noble cause – something bigger than us. The satisfaction that comes with that is priceless.

“Community clubs are all about the people. You exclude one person, and that’s how we all get excluded. It doesn’t matter how big or small the name is.”

Lado was at a loss to explain why people, in 2019, are still treated differently because of their background, or the colour of their skin.

“It’s for reasons unknown – people being scared of what they don’t know, being ignorant, or just the fear that comes with the unknown,” he said.

“When I was in that situation, I was never going to give him the satisfaction of thinking it got to me. The best part of the whole scenario is that none of my team mates knew it happened at the time.”

Lado doesn’t think of himself as a trailblazer at Cora Lynn. Far from it.

“Because before me, there were others,” he said of past players from other minority groups.

For Michael and others at the club, the dream now is to turn the legacy of the likes of Lado into something long-lasting – and to hopefully see a number of these enthusiastic youngsters rise through the senior ranks.

“For this to continue, and grow, we need a sustainable plan moving forward,” he said.

“One of our dreams – from Lado and myself – is to see the first young Sudanese guy come through and play senior football for the club.”

Lado can’t wait for that day.