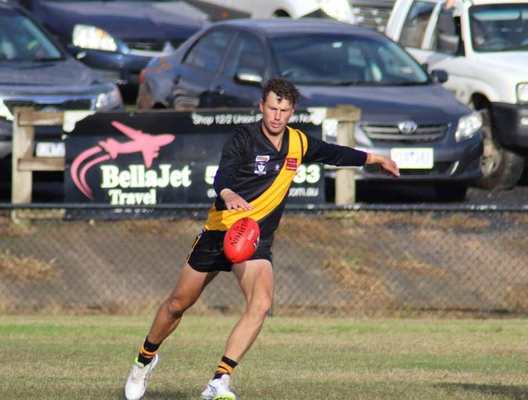 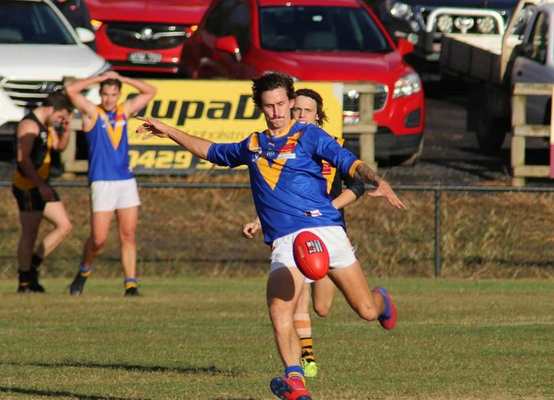 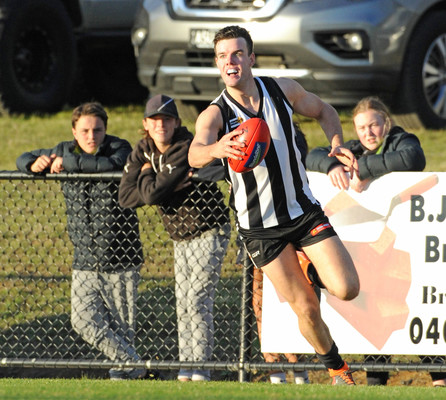 OUTER EAST FOOTBALL PREMIER DIVISION REVIEW – ROUND 3 There’s still plenty of work to do and plenty of challenges ahead, but Narre Warren is inching closer to their very best football after a clinical performance against Upwey Tecoma on Saturday afternoon. The Magpies were absolutely dominant to run out 20.22 (142) to 2.4 (16) […]

There’s still plenty of work to do and plenty of challenges ahead, but Narre Warren is inching closer to their very best football after a clinical performance against Upwey Tecoma on Saturday afternoon.

The Magpies were absolutely dominant to run out 20.22 (142) to 2.4 (16) winners at Kalora Park, dominating for four-quarters and overcoming some early inaccuracy to make the Tigers pay.

Matt Shinners’ group were defensively sound in the first half to hold the Tigers’ dangerous forwards goalless, and then went on to slam 11-goals to two after half-time to pick up some handy percentage, and more importantly confidence.

After three games of putting together strong patches of football but not being able to do it consistently, Shinners told the Gazette that the win was the first sign that his side was starting to settle into a grove.

“It was one of those games for us where we’re able to put together four quarters of sustained pressure, so it was really pleasing and more of what we’re about and how we want to play our footy,” he said.

“We were really good – we can obviously improve in a lot of areas, but it was the first time this year we’ve put four quarters together.

“The challenge for us is now doing it two weeks in a row.”

Shinners said it was pleasing to inject more youth into the side this week, but challenged his group to maintain their intensity.

“We had two debutants again this week, so it was good to give them a go – we’ll have a couple more young blokes come in again (on Saturday),” he said.

“Physically we’re really good, but it’s more mental for us – we’re not getting ahead of ourselves.”

Aaron Wilson (five goals), Stewie Scanlon (three), Nathan Foote (three), Daniel Jackson (three) and Michael Collins (two) were completely unstoppable in the forward half, with the Magpies enjoying a whopping 42 scoring shots, including 12 in the first quarter alone, while the likes of Dylan Quirk, Trent Cody and ball magnet Brad Scalzo were vital all day.

But Shinners said, despite a strong win, the challenges were coming for his club and all former SEFNL clubs, with recent results not a true indicator of what to expect from the Yarra Valley clubs as the year progresses.

“Moving forward, it’s going to be interesting – Beaconsfield had a really similar scoreline against Wandin, so the real question is whether the Casey and Cardinia clubs can sustain this on the smaller grounds,” he said.

“If you can keep your game plan and structures on the smaller grounds, you can definitely still play your best footy.

“That’s the question mark – at the moment, everyone’s still finding their feet. We haven’t gone up there to play Wandin, Upwey yet, so that’s going to be the real challenge.

“We’ll all have to re-adjust to the grounds.”

In other clashes across the Premier Division, Olinda Ferny Creek secured their first victory of the season in a hard-fought 10-point win against Healesville.

After the visitors took a narrow lead into quarter time, Olinda took control to kick six goals to four in the final three-quarters, but probably should have won by more after having 25 scoring shots.

James Belli, Nick Keegan and Pete Gough were instrumental in the victory for the Bloods.

Woori Yallock also enjoyed a strong win against Cranbourne, with the Eagles venturing down to take on the Tigers for the very first time.

The Tigers started slowly, and were unable to get their game moving as the Eagles settled quickly, spreading nicely and using razor-sharp foot skills to cut the game apart.

Taking a 19-point lead into quarter time, it seemed that the visitors were just going to have too much class on the outside.

But that’s where things changed.

With the weather turning sour, the Tigers turned it on, wrestling back the momentum to kick eight-goals to two in the second-term, and after an impressive third term, took a 26-point lead into the final change.

Casey Demon-listed midfielder Anthony Vella was superb for the visitors all day, while big man Michael Wenn and gun playmakers Ryan Jones and Shaun Marusic were all excellent.

In an excellent, morale-boosting win for the Tigers, Alex Marsh snared five-goals, while the returning Michael Riseley was imperious in the backline.

Looking ahead to Round 4 and all eyes will turn to the ‘Battle of the Creek’ between Beaconsfield and Berwick at the brilliant Holm Park facility.

With a monster crowd expected to descend, it’s a genuine early-season blockbuster between two famous rivals.

Both sides enter the clash in ominous touch, with the Eagles coming off a remarkable win against Wandin to get them on the board, while the Wickers will be refreshed after a bye and will be looking to continue their winning ways after an Anzac Day drubbing of Healesville on 25 April.

An impressive feature of both sides is the ability to score quickly, and use the full width of the ground to cut up their opposition with elite ball-use.

The form of champion ruckman Scott Meyer will have the Wickers on their toes, with the Eagles star in a dominant three-week patch to start the year, while the form of young gun Jamie Plumridge, and experienced jets Sean Dwyer and Jake Bowd give reason for the home side to be extremely confident they can take down the reigning SEFNL premiers.

Aside from going down to Wandin in a classic match of football, Rhys Nisbet’s group has done little to suggest they are anything but the team to beat, with the form of exciting goal kicker Harry Money turning heads. Travis Tuck, Ash Smith and reigning SEFNL league best and fairest Madi Andrews are all playing excellent footy, and will have an edge on the Eagles in the middle of the ground.

Elsewhere, Cranbourne welcome Wandin to Casey Fields with the Doggies looking to bounce back from a shock loss to Beaconsfield last week at Holm Park, Narre Warren travel to Healesville for the first time, while Olinda Ferny Creek will fancy their chances of consecutive wins when they take on Woori Yallock at home.