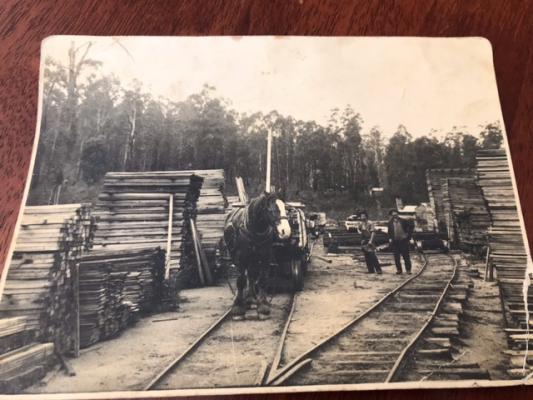 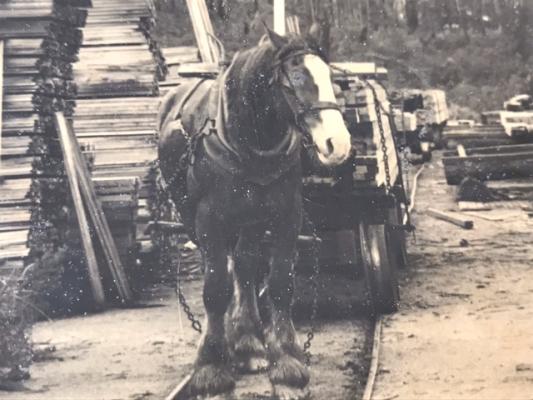 This is the story about the bond between my Dad and his constant working companion, his horse Duke, in 1932. […]

This is the story about the bond between my Dad and his constant working companion, his horse Duke, in 1932.

Back then, Dad and Mum moved into a hut at Dyers Mill.

His job was as a tallyman and stacker of the timber that came into Gembrook that was then loaded onto railway trucks on Puffing Billy, and taken to Upper Ferntree Gully station.

My father worked with his horse Duke five and a half days a week doing the same job.

Mum was telling me when I was old enough to understand that his horse was very playful!

Sometimes it would get itself out of the stables and hide among the trees, without twitching an ear, until Dad would find him.

Apparently my Dad stuttered, so this day his horse decided not to pull the load of timber, so in his stutter told his horse to “get out of the chains and tally the timber and he would get in the chains and pull the bloody thing!“

His workmates told my Mum (Gladys) that if he hadn’t married her, he would have married the horse!

Also Dad used to say he was a good union horse, as soon as the whistle blew, it couldn’t get out of the chains quick enough to get back to the stables for his chaff and water.

After the 1939 fires, Dyers shifted their mill to Tanjil Bren, there were 18 mills within 10 miles, or 16kms, of Tanjil Bren.

They started up to cut up the burnt trees as quick as they could!

My father and his horse Duke had a similar job at Tanjil Bren.

As we were still living in Gembrook, Dad was starting to build a house for the family, it never got finished!

As he joined the army in the Second World War, when he left the mill, his horse would not work for anyone else, so they left it to roam around the stable and horse yard.

This one particular day, Dad’s old horse came out of the stable very agitated and walked around the yard, looked over the rails and up the road that Dad used to come down every morning.

It was worked out later it was the 1st of June 1941, the same day Dad was wounded and taken as a prisoner of war.

His horse passed away on the 25th of September 1941, they said it died from a broken heart.

That was the same day my father Private Arthur Smith VX16659 2/8th battalion sixth division, died in the P.O.W camp at 8am Australian time.