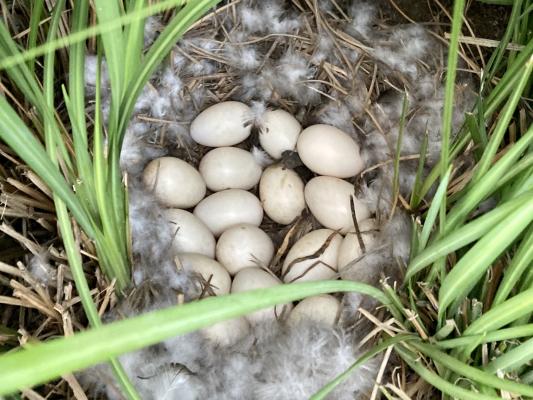 A clutch of duck eggs are believed to have been stolen from a nest at the Lakeside lake overnight on Tuesday 4 August.

Fifteen Muscovy duck eggs were taken from a wetland area next to the Seventh Day Adventist Church at Lakeside, with just one egg left abandoned.

Lakeside resident Pat Jackson and her husband Russ, who walk around the lake every day, noticed the eggs missing on Wednesday morning.

“My husband has been checking on the eggs every day because we love it when they hatch. Last year we saw 15 eggs hatch,” Ms Jackson said.

“This duck has been sitting on her eggs for over two weeks and now they are gone.

“We don’t think it was an animal or one of the other birds that stole them because there weren’t any broken shells or anything – if it were a dog there would have been at least a couple of broken shells. The mother duck has also deserted her nest.”

Ms Jackson said she does not understand why people would want to steal duck eggs.

“How cruel are some people? Can’t they leave our wildlife alone? They bring so much joy to locals walking around the lake. People are sick and it really upset me,” she said.

“The nest was so well hidden that Russ doesn’t think too many people knew about it. I walked around and he told me where they were and I couldn’t even see them.

“Last year or the year before, this bloke egged his dog on to go for a swan and it hurt the swan so much that it had to be put down. It makes me so sad.”