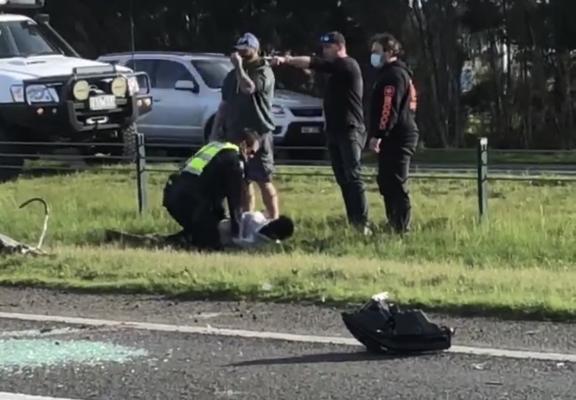 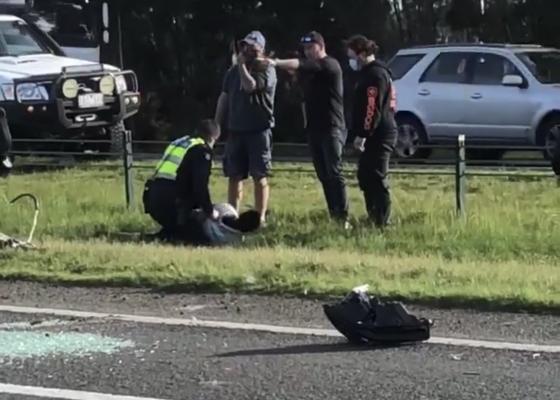 A young man who allegedly tried to flee a horror high-speed freeway collision on foot before being tackled and held in a citizen’s arrest has been charged.

The 20 year old Hampton Park man was charged with theft and traffic offences following a two-vehicle collision on the Princes Freeway in Officer on Saturday morning, 1 August.

Victoria Police allege a stolen red Mazda small-SUV collided with a black Mazda SUV – which was being driven by a woman with a baby on board – near the Cardinia Road on ramp.

Tristan White was one of three men who chased after the alleged offender and held him in a citizen’s arrest until police arrived.

Mr White said the stolen red car sped past him just minutes prior to the crash, and claimed the driver was doing between 150 and 200 kilometres.

“I was on my way to buy a car in Berwick when this absolute knucklehead flew past me in the service lane,” he recalled.

“With the amount of w*****s on the road these days, I didn’t really think much of it, but soon enough, we saw he’d crashed. It was just chaos.

“The whole thing was just unbelievable. I thought someone was dead straight away. They’re absolutely lucky to walk out of that alive.”

It’s understood the force of the collision had sent the stolen car’s engine block about five metres from the crash site.

Mr White was immediately alerted to the alleged offender – who had reportedly left his female passenger in the car – to flee the scene on foot.

“I saw this old guy pointing towards the bushes and immediately I thought someone had done a runner, so I ran over to him,” he explained.

“We grabbed the bloke in the bushes and dragged him back across the road and over the wire rope.

“He was trying to get away and he was having a bit of a sook, and kept trying to break my grip so I just flipped him over and sat on him until police arrived.”

Mr White said the ordeal lasted about five minutes, but felt like a lifetime as the young man attempted to squirm his way free.

The alleged driver and his 17 year old passenger were arrested by police at the scene. They were taken to The Alfred hospital under police guard in a stable condition.

According to an Ambulance Victoria spokeswoman, the man sustained an abdominal injury and the teenage girl had back pain.

The driver of the black SUV, a 37 year old woman was taken to Dandenong Hospital in a stable condition after suffering a head and leg injury.

Her one year old child was also taken to hospital for observation.

The Pakenham Bypass was closed inbound for about two hours and motorists were re-directed on to the exit ramp at Cardinia Road.

A Victoria Police spokesman confirmed the man was charged has been remanded in custody to appear at a Magistrates Court at a later date.