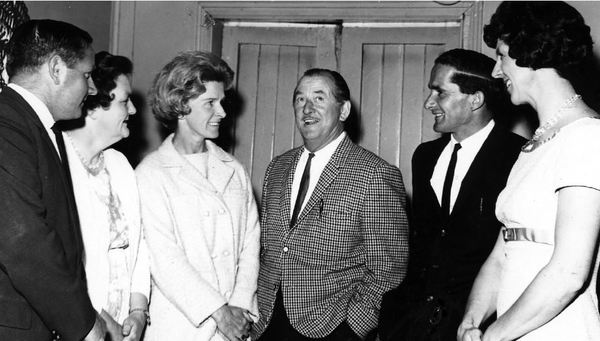 The Nar Nar Goon Football and Netball Club has long been a source of fascination to those outside the quaint little mural town with a quirky name.

It has inspired headlines, helped garner celebrity support and put the Goon on the map.

Now the club is engaged in an international battle for the most unusual club name.

Other contenders for the title the Toronto Tinnie Sinkers, the Vincentia Van Goghs (complete with severed ear mascot), the Woolgoolga Seahorses, the Nerrandera Carpheads, the Silvan Slugs, the Maitland Pumpkin Pickers, the Noalunga Shoes and the Epsom Salts.

The Nar Nar Goon name has scored the town – and club – scores of publicity over the years.

Back in 1980, former Herald-Sun reporter Daryl Timms explored the phenomenon in an article for the Sunday Observer.

It followed headlines earlier that year when the wife of Carlton legend Alex Jesaulenko went in to bat for her husband when his coaching job was on the line, saying she would follow him to coach anywhere… even to Nar Nar Goon. The quote was plastered over media Australia-wide.

Club president at the time, Ron Metz, rolled with the back-handed compliment and rang the papers to say Jezza was welcome at the club anytime, but only as a player, because they already had a good coach in Jim Dore.

Well known television and comedian Joffa Ellen visited the Goon in 1956 doing a promotion for ice cream company Streets, took an instant liking to the town and signed up as the footy club’s honorary patron.

Television legend Bert Newton was another happy to keep Nar Nar Goon on the map, broadcasting the club’s scores on his 3AW radio segment every Monday morning. He was promptly signed up as the club’s number one ticket holder.

In more recent times, Melbourne radio station Triple M set out to explore the character of local towns and stumbled upon the Goon. Breakfast announcer Bridget Duclois challenged co-host Mike Fitzpatrick to pen a song about the town. The whole Cage breakfast team broadcast the launch of that song – to the tune of Thirsty Merc’s hit 20 Good Reasons – live from the clubrooms, with hundreds turning out for the event.