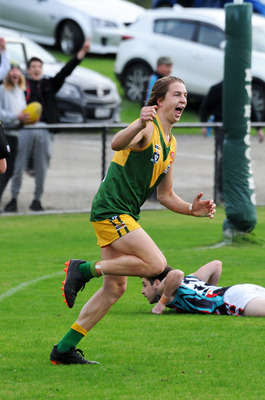 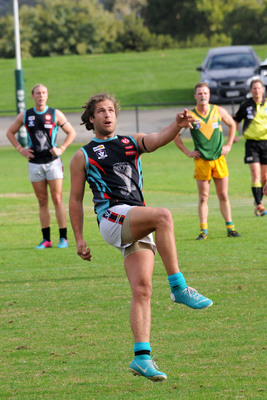 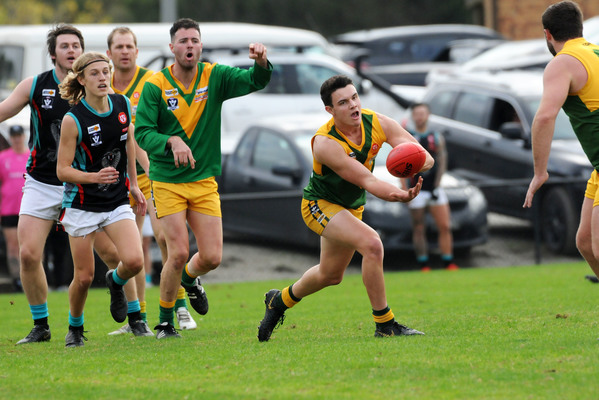 There’s clearly plenty of fire left in the belly of these Demons.

That was the most obvious takeaway from Saturday’s clash at Inverloch as Ben Collins’ men claimed a stirring, come-from-behind victory over the Sea Eagles – 13.10 (88) to 12.13 (85).

From the outside, some were questioning the resolve of the Demons after the horror of last season’s grand final result against Phillip Island.

They were questioning if Kooweerup had what it took to bounce back.

And earlier in the season, with the side missing a number of key players, that quest might have seemed unlikely.

But that was a premature, shortsighted view.

Whether the Demons will be able to find it within themselves to make a serious premiership tilt in September is another question.

But will they book themselves a ticket as one of only five sides to make the finals dance?

And from Saturday, against one of the standout senior sides of the opening couple of seasons of the WGFNC, the signs looked promising.

The Demons scored just one goal to the Sea Eagles’ four in the opening term, but as Collins explained, he was far from panicked.

“Straight away we were on our heels.

“Our pressure was really good, but they converted and we didn’t.”

Collins said the margin at the first break didn’t accurately reflect the Demons’ pressure around the contest, adding “that score didn’t really show where the game was at”.

And, in fact, the scores were level at 6.5 before a couple of timely late majors from the home side.

Collins said he and his charges discussed at half-time their lapses in concentration, and he emphasised that the side couldn’t afford to be down by more than three goals with a quarter left to play.

They backed themselves in to win kicking to the scoring end in the last, and that’s exactly what they did – even if it took until the final 30 seconds of the contest for them to lead for the first time.

The visitors kicked a goal in the first minute of the final term, but Inverloch answered almost straight away.

Yet the Sea Eagles would go on to kick a particularly wayward 2.5 in the last as the Demons snared a famous three-point win.

With the Demons down more than goal with only around three minutes remaining, the message went out for the visitors to throw caution to the wind – particularly off half-back.

Then, with just 30 seconds remaining, a goal to Mitch Collins delivered the premiership points to Kooweerup.

Following the contest, Ben Collins was full of praise for the Voss brothers – Nathan and his younger brother Matt – for their impact on the game.

Nathan was incredibly composed and was involved in some of the most telling plays of the game, while Matt had a strong influence on the contest particularly once he was switched on to the red-hot Oscar Toussaint.

Joel Gibson was again impressively influential in the engine room in his first season at Demonland, while for the Sea Eagles Lachlan Scott, key forward Sam Gibbons (three goals), and Daniel Reid also made their presences felt.

Jason Wells (five goals) once again booted a bag up forward for the Demons.

Following the win, Collins described the task of defeating the Sea Eagles on their home turf as the toughest in the competition behind trying to topple Phillip Island.

“Inverloch commands real respect – they’re a great club with a great bunch of people at the club,” Collins said.

“We’ve got a good, healthy, respectful rivalry with them and it was just a great game to be a part of.”

Elsewhere across the competition on Saturday, the Stars gave the Cobras an almighty scare at Garfield, but the undefeated Cora Lynn kept its record intact with a 14-point win, 10.12 (72) to 9.4 (58), courtesy of a strong second half.

Dalyston was predictably no match for Phillip Island, going down by 121 points at home; while the Giants defeated the Panthers by 21 points at Bass, 15.7 (97) to 11.10 (76), in their Outside The Locker Room (OTLR) mental health awareness game.

The mental health message was delivered loud and clear to members and players of both clubs, and both the Panthers and Giants got right behind the work the non-profit OTLR is doing in the community.

The focus now switches to a truly mouthwatering Round 9 with fascinating battles right across the board – highlighted by the showdown of the undefeated sides, Phillip Island and Cora Lynn, at Cowes.

Elsewhere, Bunyip hosts Dalyston; Kooweerup hosts neighbours Tooradin-Dalmore in what is sure to draw a massive crowd to Denhams Road; Korumburra-Bena takes on Garfield in a winnable contest at the showgrounds; Nar Nar Goon hosts Inverloch Kongwak; and the Dusties take on the Panthers at Western Park.